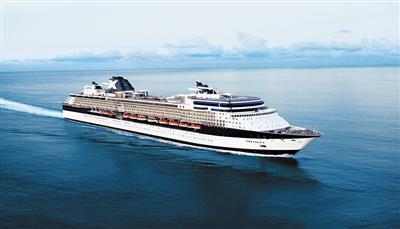 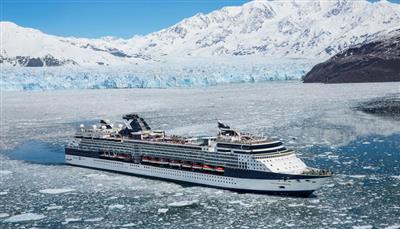 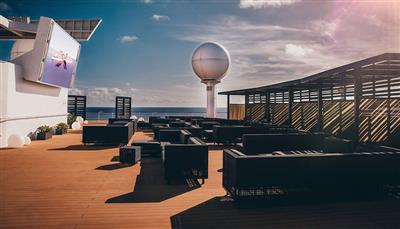 Having entered service with Celebrity Cruises in 2001, Celebrity Infinity is no longer technically a new ship but with renovations and refurbishments as recently as 2012 and 2015, she’s shown to be the perfect vessel to move with the times and the needs of the modern luxury cruiser. This not only involved the upgrading of the cabins and onboard features, but also new dining and entertainment venues.

Celebrity Infinity features several restaurants popular across most of celebrity’s ships. Favourite specialty restaurants are Qsine and United States Restaurant. Qsine is an extremely modern addition to the dining options with Celebrity. In this popular dining venue guests can enjoy ordering a variety of tasty dish combinations from interactive tablets. Meanwhile, despite the name, United States Restaurant features the very best of French gastronomy.

You will also find fantastic dining at the two free main Celebrity dining venues onboard Celebrity Infinity. Trellis is a two-storey hall dominated by a grand staircase, serving over a thousand diners’ daily menus for breakfast, lunch and dinner. Instead of the main ding venue’s white-glove service, guests can simply go to the Ocean View Café for self-service meals at the buffet with varying foods being prepared through the day.

For those looking to relax and rejuvenate in AquaClass, the dining options are up to a standard fitting the Canyon Ranch Spa Club. At Blu, you have fine ding with clean eating ingredient s lovingly prepared. There’s also a chance for some health-conscious snacks in the spa café with fresh smoothies and bites without having to change.

Around the rest of Celebrity Infinity you will also find plenty of other options for a quick and tasty bite from Gelateria and al Bacio’s much-loved Italian coffee and ice-cream to the Mast Grill and Pool burger bars. Meanwhile, Bistro on Five serves an amazing twelve different crepes made fresh with room service 24 hours for those wanting to stay in.

In the evenings you’ll find plenty of bars and lounges to suit all tastes and moods, from chilled-out deck and cocktail bars to a high-energy nightclub and lively casino. For those wanting a quieter evening, there’s always the outdoor cinema or a variety of acts, from live music to engaging shows, in the main theatre.

Celebrity Infinity matches the same high standards as the rest of Celebrity’s fleet of luxury cruise ships with a host of recreation options to suit all tastes. Focussing on enriching cruises, on Celebrity Infinity you’ll find many workshops, sessions and classes themed on ‘taste’, ‘learn’, ‘play’ and ‘revive’ to give everyone a truly rewarding cruise no matter your interests or passions.

For Celebrity guests wishing to revive and rejuvenate, the adults-only solarium and spa are a real highlight. Filled with heated salt water to repair tired bodies and with tranquil music tinkling to relax the mid, the solarium is a popular place to unwind and relax. Meanwhile, many fitness and wellbeing sessions are available each day, from yoga to cross fit, so you can stay active during your cruise.

As well as outstanding dining venues, Celebrity Infinity has much to offer in terms of ‘taste’, including cookery classes, trips to the market with the chef and wine tasting at the wine cellar. You’ll even have the opportunity to be advised on which drink to have with each meal by a resident expert, from hundreds of wines, many of which can be sampled from the Celebrity drinks packages or purchased for an extra-special treat.

During the day, the swimming pool area and Jacuzzis are a popular hub where you can do a few lengths, soak in the hot tub with a drink or just read a book in one of the cabanas or sun loungers. There’s also a library and Wi-Fi access for those wanting to read, play a game or catch up on the news, while the shopping emporium and art gallery are ideal for tax-free souvenirs.

We had a wonderful time cruising from Venice to Barcelona from 24/8-5/9. The staff were incredibly attentive and hard working, the food was truly superb and the ship a grand old lady of the seas.

A mid-sized ship with not too many passengers. Communal areas are well-maintained offering an impression of quality.  The balcony cabin was in good condition but could be a little larger.The queen-sized bed was very comfortable and well looked after by the stateroom attendant. Food in the Trellis restaurant is of high quality with plenty of choice, but the starters were mainly soup or salad. The service was fine and as I had a nut allergy well-managed by the restaurant staff, by allowing me to see and order my food the night before so the chef could make sure it was totally nut free. My main concern was the entertainment in the theatre. The ship's own cast were not up to the job and very disappointing. The guest performers were good and well received. Overall an enjoyable cruise which I would take again.

We travelled with Celebrity X last year on the EQUINOX. A little disappointed in the infinity. Was certainly needing some TLC The staff were wonderful. The entertainment was excellent. Disappointed about the gratuities. We have never been charged On a daily basis before. Usually this is included in the price of cruise. And the fact we did not get the opportunity to give to the staff we felt deserved it. Those that attended to us Personally. This was a huge amount taken off us at the end of the cruise To which my husband gave out tips to those whom we wanted to. After the cruise we had been told by some of the other passengers that You can opt out of this. We were not aware of this. This is the only reason I have marked the cruise at a 4.