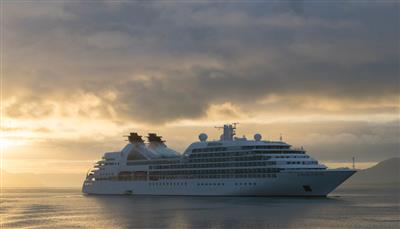 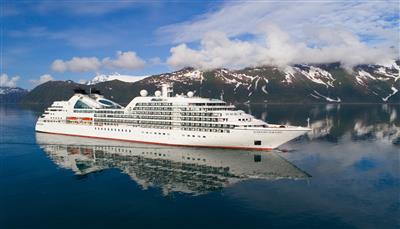 Seabourn Sojourn yacht debuted in June of 2010, featuring 225 luxury suites, four dining venues, and six bars and lounges. Offering an unparalleled choice in accommodations, guests can choose from 225 ocean view suites measuring 295 to 1,682 square feet, 90% with private verandas. This includes five Owner's Suites measuring up to 1,062 square feet (including the veranda) and four two-bedroom Grand Suites with up to 1,682 square feet of private living space. You can also elect for a stay in one of the 22 Penthouse Suites on the uppermost decks, each featuring up to 534 square feet of space.

After a restful night’s sleep, use your time on the ship to indulge in the delicious cuisine, enjoy the entertainment onboard and sit back and watch the world go by. However you choose to spend your cruise on Seabourn Sojourn, you’re guaranteed a holiday to remember.

Gems of the Pacific Rim from Los Angeles

Route of Ancient Empires from Taipei

Seabourn Sojourn is sure to delight you with its varied menus across four restaurants. The Restaurant offers eclectic menus developed specifically for The Yachts of Seabourn by celebrity Chef Charlie Palmer. Seabourn's chefs shine as each restaurant offers discerning guests a different experience, from avant-garde tasting menus to casual meals on deck.

In addition to the wide range of delicious cuisine on offer throughout your cruise, Seabourn prides itself in providing sophisticated entertainment no matter where you choose to spend the evening. After the sun sinks into the horizon, the Seabourn Sojourn yachting life lights up the night.

Life onboard Seabourn Sojourn isn’t just about tasty food and evening entertainment; there are also a range of enriching activities from which guests can benefit during their cruise. All Seabourn ships feature a beauty salon, so why not take some time out to have some holiday pampering? Alternatively, the fitness centre is home to state-of-the-art treadmills, elliptical trainers, stationary bikes and free weights. What better way to fit in your workout than with floor to ceiling views across the ocean? However, for something more leisurely, and a firm favourite amongst seasoned cruisers, the card room offers a peaceful space where you can chat to other guests and enjoy a game of bridge or backgammon along the way.

Nov 24 2019 Yes, this was luxury cruising. Verandah suite is a very large balcony cabin with marble fitted bathroom with twin sinks and a shower too. Top fittings everywhere. Excellent minibar service by cabin staff. Attentive without asking. No tipping sought, either here or anywhere. Dining was just lovely everywhere. The buffet was like a quiet restaurant on other cruises. Spacious with tables always available. Wine choices very good and varied, and readily served. All food requests prepared quickly and with lovely lively staff. Few used the restaurant for breakfast and this was the only let down on the whole 12 day trip. Comedy value was high though. We began counting the number of staff who inspected a food item coming out and trying to decide who it was to go to. With only about twelve tables in use there were plenty of staff and I counted six deciding who got the oatmeal. . Some management needed here, but food was great though. After two days of this fun we retired to the buffet and were just amazed at the quality, calm, and efficient experience. Evening restaurant dining was top quality also. Choices and service were great and the frequent opportunities to join a hosted table gave us many social evenings too. With only 400 guests we were often alone on corridors, lifts and in quiet bars. The afternoon tea was wonderful with food choices better than Cunard and the service was more attentive and personal. Many nice touches everywhere. The Square with daily newspapers, in full, available printed. fresh macarons every evening, wonderful coffee almost anytime. Staff to sort out your wifi problems and remembering your name for the rest of the cruise. Lovely lovely trip. Carambola beach with champagne and caviar in the surf - magic. The banana boat only a bit less so, though apart from the embarrassment of trying to get back in to the towboat, that was very jolly too. We met several people for whom this was their first cruise and they will struggle to appreciate others. We had been on about 10 cruise lines before, and Seabourn was in a different league. Yes it was expensive, but I will remember all of it fondly, and I do think it was worth the money. I would go again without hesitation. Saving already and I think we may cut down on lesser trips.

Thankyou for all your help with booking this amazing trip. The ship was outstanding in every way the crew were wonderful too so we have been spoilt to bits and looking forward to booking another cruise with Seabourn hopefully early next year. Thankyou very much Regards Denise Page and Company

Excellent cruise in excellent (apart from Ketchican) weather. Well looked after. Very small matter not good - wife ill one evening - we asked for hot milk and toast to cabin - milk barely tepid and toast soft/damp. Main disappointment is flights home - if Iglu responsible, read on - if Seabourn responsible, please forward! We were routed from Anchorage to Denver to Toronto to Glasgow. Anchorage to Denver on United Airlines, old and very cramped plane, uncomfortable seats. Long wait in Denver. Then reasonable plane Air Canada, to Toronto, but 1 x hour late in leaving. Still long wait in Toronto, then reasonable flight Air Canada Rouge to Glasgow. However, no cases arriving at Glasgow, and still no cases 28 hours later! Not happy - spoiled any good feelings about cruise.

Nice friendly ship but the biggest let down is the inconsistency of service and the quality and temperature of the food being served. When asked for meat to be “well done “ you do not expect blood in excess to be coming from the meat. This happened on several occasions. Food was often served warm on a red hot plate which still doesn’t make the food hot. All of this was brought the the ships attention but continued over the course of the cruise Hand towel on one occasion had holes in. Plus side of ship, great coffee and fantastic service in the square, entertainment better than some top London shows. Suites very large and comfortable. Fantastic complimentary room service. The Thomas Keller Grill served excellent food.

SEABOURN SOJOURN CRUISE 15TH APRIL 2011 TO 27TH APRIL, 2011. SEGMENT SIX OF THE WORLD CRUISE This was to be our very first cruise with Seabourn and from the word go everything was handled very professionally. We received our tickets, and like other cruise lines use to be, they were in a leather wallet complete with four leather luggage labels. We arrived at the dock, Civitavecchia, Italy, a little early, but this did not deter them one bit. We were shown to the check in desks and our pictures duly taken, we were given a leather wallet, yet again, with our cruise cards in. We were then asked to go and take a seat as our suite was not yet ready. White gloved waiters appeared with either hot chocolate or champagne, complete with rugs for your knees if you were cold. We were soon onboard and shown to our suite, and to our surprise we had been upgraded to Penthouse deck, we had only booked a guarantee suite. The suite was beautiful, we had a bedroom complete with a living area with settee and chair, on one wall was a full length cupboard which housed our fridge, which had been stocked with 2 x 1 litre bottles of spirits and all the mixers and beers. The mixers and beers were replenished as we drank them through the cruise. On further inspection we found that we had a bottle of champagne on ice just to wish us a very enjoyable cruise. Not long after our arrival in the suite our Stewardess, Agnes, rang the bell to introduce herself, complete with canapés and a selection of soaps that we could choose for the bathroom. The bathroom consisted of two wash hand basins in marble and a shower, the suite we had been allocated was a wheelchair friendly suite so therefore no bath. We then went to sail away and you could have whatever drinks you required, the whole cruise was open bars throughout the ship. Both wines for lunch and dinner were also freely available, and no sooner had you half emptied your glass then a wine waiter was asking it you required a refill. We have to say that the staffs in all venues were exceptional; they even addressed you by name after the second day. This really foxed us, as we had not given our names to members of staff. I then asked one waiter how he knew; he just said that it was a trade secret of Seabourn. It transpired that they were shown photos of the passengers and given their names, they were told to try and memorise as many as possible. Now on to the food. Breakfast, Lunch and Dinner could be taken in the Colonnade, this was the buffet restaurant, not like anything we have seen on other cruise lines, and we have been on quite a few. You were asked if you wanted to be seated with other passengers or to dine just the two of you. There were so many things to choose from, also an open kitchen where the Chef prepared specials of the day. Also we had the Main Dining Room, again Breakfast, Lunch and Dinner could be had here. Also on deck there was the Grill, this was normally open for Lunch and casual Dinners. This was Sojourn’s Segment Six of her World cruise and so we were treated to a free shore excursion and this was to the Cava Region in Barcelona Spain. We were taken by coach to a very large Wine Cellar, called Codorniu, here we were treated to a tour around the cellars and then Flamenco dancing in a Grand Hall complete with tastings and food. Overall a very good excursion. I cannot say how much we enjoyed this cruise; my only disappointment was the fact that the food in the main dining room was often, what I call, Cruise Temperature. It was not as hot as I would have liked, even after speaking to the Maître many times. I really think that if Seabourn are going to advertise their cruises as six stars, then they should take note of their passenger’s wishes. I am sure that this will not be the last cruise with Seabourn. Ports visited. Civitavecchia. Barcelona, Valencia, Cartagena, Lisbon, Bordeaux, Southampton.