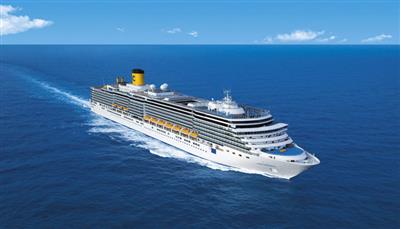 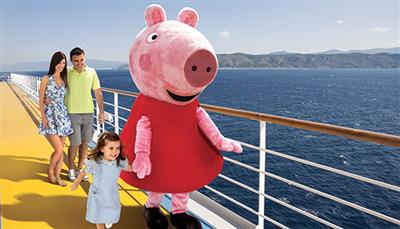 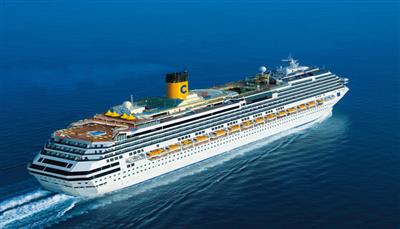 With the natural elegance of a diva and the charm of a work of art, Costa Fascinosa is the rising star of the Costa fleet. Enriched with precious and sparkling materials, its environments are inspired by the seductive atmospheres of great historic films, the protagonists who made them famous and the works that brought success to the most celebrated theatres in the world.

Aboard Costa Fascinosa you will experience the greatest thrills of the big screen and the new adventure that is about to begin: your next cruise, brimming with wonderful atmospheres and authentic cinematic locations!

Mediterranean from Barcelona with Stay

Mini Break from Barcelona with Stay

Mediterranean from Barcelona with Stay

When the time comes to sit down for a meal onboard Costa Fascinosa, you won’t be disappointed by the restaurants on offer:

Restaurant could not fail to be inspired by the memorable ballroom of Palazzo Gangi. A table overlooking the sea, dinner in good company or lunch with the family, at the Gattopardo restaurant every dish will make you feel at the centre of a sumptuous banquet.

Once night falls, Costa Fascinosa comes to life with a range of exciting and vibrant entertainment.

There’s no excuse to not stay fit onboard Costa Fascinosa as what could be a more motivating way to get that heart rate raised than modern gym equipment with spectacular views out of the ocean. Alternatively, there are also several different exercise classes such as yoga and pilates who prefer a slower paced, more sociable work out.

After working up a sweat, why not head the onboard spa where guests can enjoy several beauty therapies and treatments, including three different types of professional massage: thermal, stone and fresh lime and ginger. Take advantage of these facilities for a luxurious pampering session that will leave you revitalised and ready to explore the beautiful destinations awaiting your arrival.

Fun for all the family is easy to find onboard Costa Fascinosa. The pools and waterslide are the perfect place for a splash around to cool off from the seat of the sun (or simply relax for a few hours on one of the pool-side loungers), complete with a pirate-themed aqua park that younger guests will love. For an experience that is sure to engage all your senses, head to the 4D cinema where the immersive technology will make you feel like another one of the characters in the family-friendly films. If you’d like to spend a leisurely couple of hours browsing the shops, Costa Boutique is the place to pick up a duty-free treat or any forgotten holiday essentials.

6 - Excellent This cruise was amazing from start to finish. The crew just couldn’t do enough for you and smile from ear to ear all the time. The entertainment on the ship was fabulous and the food was delicious. I simply can’t fault the entire cruise . I can’t wait to book up again!

It was overall a good cruise, most of the food was okay as the the cruise was 499 each. It was cheap food but the cooking was good. Buffet restaurant was ok. I think the Italians probably like the food on deck 3, Otto E Mezzo Restaurant, a sit down waiter service restaurant, you had to pay for water, then charged for waiter service. The food was horrible. Variety was ok on deck 9, but not 5 star. I quite liked the Salmon though, and The head chef and Head waiter were excellent. Here the water was free as was tea and coffee. There were 5 places to see on excursions, but the beach was cancelled, and also rained in Barcelona. So don't bother with April although prices are more possibly for later months. Our steward on Deck 6 was very good and polite. He was from the Philippines. Most of the the staff were friendly and always smiled, there were a few robots. Best not to book with Iglu cruises, go direct, as we were not on the list of the Costa rep and so he let the coach go, luckily we found him by chance and he managed to stop the coach. We had to pay for transfer, although we are refunded now. So I needed a strong coffee at the motorway stop. A refund is ok, but no other compensation from a no reply email. I ll try another cruise agent or go direct next time, although my wife will take some convincing after Otto Mezzo Restaurant and nearly missing the transfer. The entertainment staff, it had to be said saved the day, they were excellent and were very good to my son, especially two girls who called him Spiderman. They deserve a medal. The main lead singer was a proper showman.

Second cruise and left feeling disappointed !! Muster station was so noisy we couldn't here what was being said and no member of staff did anything to quieten people . Some pool side bar staff were not friendly, sewage smells on deck and outside theatre, everyone was rushing for food and for the lifts, Food was not as good as the first ship . We were treated badly by a member of costas staff and have been complaining since the incident and back home and they will not do anything to justify the bad treatment we received . We will not cruise with Costa again due to very bad customer service ( waiting weeks for a reply ) and the fact they did not take out complaint seriously .