Secret Places of the Mediterranean from Barcelona, 26 October 2019 (7 nights)

Note - the guests & services onboard will be predominantly Spanish
Show more 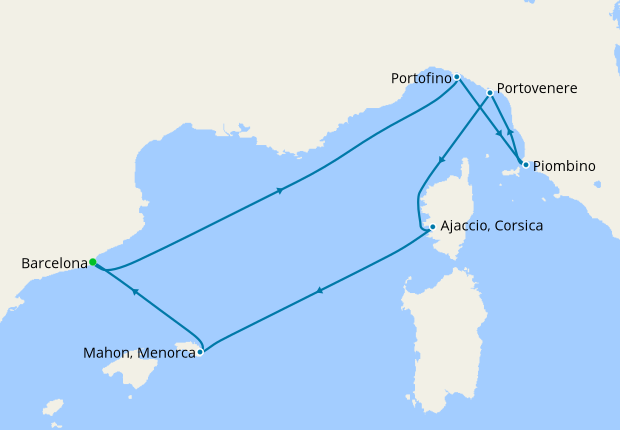 Cabins on the Zenith

A great cruise for very little money, amazing value. We went around the Canary Islands in March.Our expectations were exceeded by far.Ship very good but old. Staff delightful. Stops very good. Food average but if you have speciality menu excellent. We have cruised with many ships before including some 5-6 star ones, this was very good. Would go again.

This was our first ever cruise and it has us hooked. Definitely not perfect. The entertainment was definitely geared towards the older generation with bingo being a common item on the agenda, however despite this I would still recommend this cruise. All inclusive as standard is excellent, just tell the staff no when they try to up sell you to the premium drinks package. The only difference is you can pick the spirit or beer you are given, however in most cases the bartenders would use whichever spirit was closest, often the premium ones! Breakfast was busy and definitely the least pleasurable meal as there aren't enough tables inside for everyone, however eating in deck to the sunrise has an appeal all of its own. The only true criticism we have was the chaos that ensued if you went on an excursion booked whilst on the boat and organised by pullmantur. Yes the prices were great when booking for the next day (last minute discounts) however if you don't like crowds or being hussled around like cattle (similar to easyjet flights) then book your own elsewhere. Staff were excellent and spoke perfect English, were attentive and definitely went the extra mile. Final point to note, take a suit or dress as there is a gala night that you will not want to miss. The set menu was excellent that evening and a highlight of our trip on board the Zenith.

The Zenith is an oldish ship (launched 1992) and smallish (47,000 tonnes) and we chose it because The 7 night Canary Island itinerary suited us We like ships of that size It was very competitively priced at around £750 for an outside cabin with drinks and tips all included. We were not disappointed at all and would say it was good value. The ship is well maintained. Cabin, public areas and restaurant were fine. Restaurant food was good. We generally avoid buffet options on cruises and nothing on the Zenith made us change our habits on that. Breakfast was perhaps a weak point, all buffet apart from the coffee and orange juice. The Zenith operates in Spanish and English and we estimated about 70% of passengers were Spanish speaking. The rest, from many countries, relied on the English translations, though very few passengers were British. All that worked well enough though it clearly put pressure on the entertainment teams who did manage somehow to provide reasonable shows for all. You probably would not choose this cruise if entertainment was a major priority. Excursions were good value though some seemed to be cancelled because of lack of numbers? The only downside was that Iglu had not paid enough attention to the transfer arrangements between Tenerife South and the ship. We had to make quite a fuss to get taxis booked and it didn't work as smoothly as it should. Otherwise it was a great holiday and we would recommend Pullmantur so long as you understand they operate value cruises, not ultimate luxury,

Note: On 13 January 2018, new European legislation is being adopted in the UK which as result will mean that we may change our required method of payment at our discretion, irrespective of how any deposit or prior payment was made.
Speak to a Cruise expert 0203 848 3629
Close
﻿