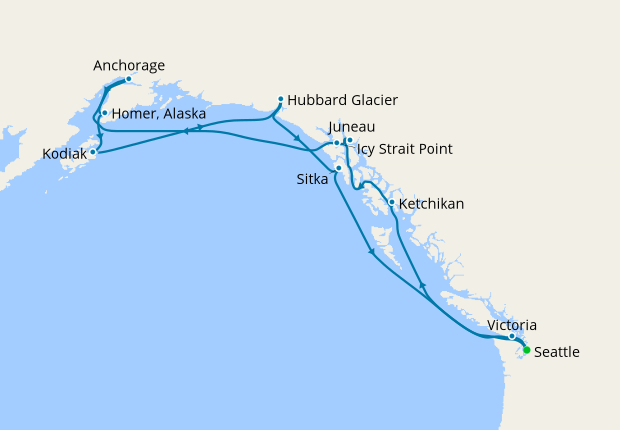 Cabins on the Zaandam

An amazing cruise! So many highlights despite extremely rough seas at the beginning but with excellent navigation made by the Captain we were kept safe and escaped even rougher seas by sheltering in inside channels. Loved sailing through Glacier alley, Darwin channel and around Cape Horn. It was good to hear the ships horn blast as we passed the Horn and it was a nice touch to be given a certificate to say that we had been around the Horn. The cruise director Kevin gave very informative talks about each place we visited and the ship had very good evening entertainment on the stage on deck 5. As we left the ship there was a line up of staff from the ship including Kevin to see us off and we thought this was a very personal touch.

My friend and I enjoyed every minute of our cruise on board Zaandam, sailing from Chile around Cape Horn and finishing in Buenos Aires. The vast majority of the staff team were excellent and looked after us well. Small criticisms were: The shore excursions are very expensive The food and service in the dining room was not as good as previous experiences with P&O on Oriana The wine was expensive The ship is getting a wee bit dated That said, I would sail with HAL again, even on Zaandam.

The ship was fine and the service was good.enjoyed all the amenities and the staff were very helpful

Unfortunately the ship did not meet our expectations because of the following; a. food was not of good quality and the system they use to have in the Lido (self service ) restaurant of serving you the main course was only for giving you limited quantity of food. b. Food also in the Dine in rest. did not meet our expectations c. entertainment was cheap and childish d. Amenities in the stateroom were limited.(They have left us only one hand soap and one shower cup for almost fifteen days) e. All drinks were very expensive and differed from their issued tariffs in internet But we have to admit that all ship was very clean, the statement also, and public toilets too. Embarkation and disembarkation were done very properly and easy Therefore we will rate the cruise with a 3

A great itinerary with awesome scenery. The ship is geared up to older clientele and has excellent entertainment throughout the day. The restaurants and food are excellent but wine and beer are very expensive. All the staff and crew are industrious and friendly. We took Holland America organised trips at each port = these are quite pricey but well worth the expense as we enjoyed every trip. The cost of wifi is prohibitive ($25 for 24hours).

The fabric and layout of the ship was really good. This however was spoilt by other aspects of the cruise. The food wasn't startling and lacked variety. Service in the dining room was slow and the food was only tepid on arrival. Very little food in the lido was on a help yourself basis. Drinks were expensive with a 15% service charge on top. The excursions were also expensive and when tendering was in process it took up to 2 hours before independent travellers could disembark. The onboard activities were limited with one person delivering the majority of lectures. The house shows were however good as was the cabin service. With no laundrette on board you had to use their laundering service. Unfortunately this seemed to sum up he firms attitude of squeezing as much as it could out of people. A prime example of that was you had to pay for coffee if you wanted it at the end of your meal in the dining room.

Thank you Iglu and HAL and all hotels and transfer's the trip was a fantastic experience. AWESOME is a word that these days is used all to frequently however in this case it is most appropriate. The captain of Zaandam sailed 20 miles off cause to sail by an Ice berg we tendered in the Falklands on remembrance Sunday and treated to a service and parade on a lovely sunny day that will live in our memory's for ever. All the ports were Iconic and rounding cape horn to eventually cruise to see a Glaser. Once again our most grateful thanks for the best cruise ever and our 32nd so we have many comparisons.

We recently returned from a cruise around South America with a 2 night stay in Buenos Aires and a 2 night stay in Santiago at the end - all arranged by Iglu. From the moment we set off from Heathrow the whole holiday went superbly. We flew with British Airways and Iberia via Madrid to Buenos Aires and on our return Journey we flew via Sao Paulo with LAN and British Airways. All flights were good with plenty of time for transfers. Our hotel in Buenos Aires was very central within easy walking distance of many of the sights. The hotel in Santiago ( the Park Plaza ) was excellent although not central. It was in a very nice area with the stop for the hop on hop off tourist bus just outside. All our transfers were on time and in clean comfortable cars. Embarkation went very smoothly and our cabin was ready even at midday. The service was excellent in all areas without it being too familiar. We loved the Zaandam because we felt it looked like a real ship rather than a tall floating hotel. The food was very good in both the Lido and the more formal Rotterdam restaurant with plenty of choice. The range of activities provided on board was very good although we felt that there should have been one or two guest speakers talking about the area. There were plenty of quizzes, cooking demonstrations, tango lessons, a digital workshop and plenty more. The weather was superb so we were able to visit all ports. The port excursions were well organised and there was never any queuing to get off the ship. We enjoyed all ports, particularly the Falklands where we visited Bluff Cove and the penguins. The scenic cruising was wonderful. The bow was opened up and hot pea and ham soup was served on deck. The captain and his crew contributed greatly to our enjoyment. They tried very hard to ensure that we saw everything. The holiday could not have been better and we would definitely travel with Iglu and Holland America again.

We enjoyed an excellent cruise round South America, with flights from Heathrow to Buenos Aires, return flights from Santiago via Sao Paulo. We would like to thank Iglu for organising this trip as all the connections, hotels and transfers were spot on. We had booked with Iglu on another cruise and were equally satisfied. We will definitely book with them again.

Excellent cruise and all arrangements made by Iglucruise for pre and post cruise transfers and accommodation worked well. If there is any criticism it is that the Frier's Park hotel in Buenos Aires is not really five star and was a disappointment.

Note: On 13 January 2018, new European legislation is being adopted in the UK which as result will mean that we may change our required method of payment at our discretion, irrespective of how any deposit or prior payment was made.
Speak to a Cruise expert 0203 848 3608
Close
﻿