Discover the Force
- The atrium aboard Disney Fantasy transforms into Star Wars-themed galactic party so bring your best Star Wars costume and join in this special gathering.
- Characters from across the Star Wars galaxy are onboard for interactions and photos.
- Guests indulge in the Star Wars films and television series, including all the films in the Star Wars saga.
- Specialty Star Wars-themed beverages, snacks, dinner menu items and desserts please the palates of everyone from Padawans to Rebel pilots to Tusken Raiders.
Learn the Ways of the Jedi:
- In “Jedi Training: Trials of the Temple,” Force-sensitive children learn the ways of the Jedi and use their new-found skills in a final face-off with Darth Vader and Kylo Ren.
- Star Wars-themed arts and crafts, games and activities are offered throughout the day in all youth spaces for younglings to explore their powers.
"Summon the Force":
- The epic day at sea concludes with the “Summon the Force” deck celebration where guests unleash the Force during games, music and a galactic dance party.
- The grand finale features legendary Star Wars characters, pyrotechnics, stunts, special effects and a stunning fireworks display accompanied by John Williams’ iconic music.
Star Wars: Command Post:
- In Disney’s Oceaneer Club on the Disney Fantasy, Star Wars: Command Post takes kids on a journey where they train with heroes of the Star Wars saga and help with missions against the First Order. Themed to a Resistance base turned Force-filled play area, this youth space takes kids to a galaxy far, far, away in a whole new way.
- Here, the stories and legends of the Star Wars films come to life as they learn to traverse the galaxy with flight training simulators. Children can interact with holographic models at a one-of-a-kind Star Wars holotable that projects 3-D images of famous Star Wars ships, droids and vehicles such as the Death Star, TIE fighters and K-2SO from “Rogue One: A Star Wars Story.”
- Kids can also embark on an action-packed training adventure with members of the Resistance showing them how to channel the Force and use it to battle First Order Stormtroopers. Nearby, the lovable Resistance droid, BB-8, stops by to inspire future Jedi. 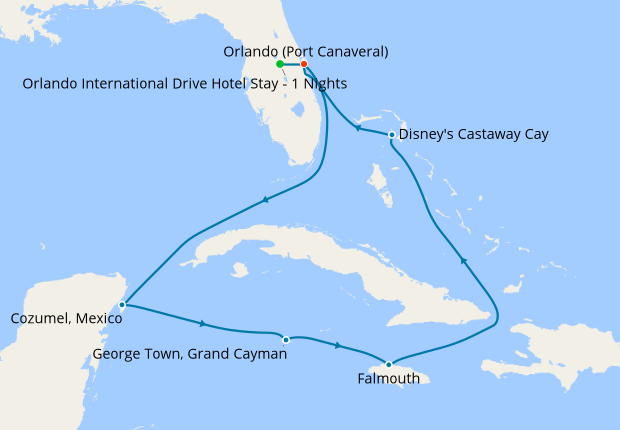 Cabins on the Disney Fantasy

We combined one week holiday on Fantasy around the Western Caribbean in September 2018 with a trip to the Disney in Orlando. It was a perfect holiday for our active family group of six. Four adults and two children. The cruise was fantastic overall. The quality of the stage shows are excellent, we found the ship to be very clean, very well organised for families, we loved our staterooms, the family evening dining experiences, the comfy seats in the cinema, and most of all the children loved returning to the staterooms to find out what animal model our room attendant had left on the bed each evening! We don’t normally enjoy beach holidays, but the Disney really look after their guests so well on Castaway Cay and it turned out to be such an enjoyable day and we were so sad to leave. The children did not join in the clubs and we did not take advantage of much of the adult only entertainment because there was so much for us to do together as a family. Although we fully agree that alcohol and children are not a good cocktail for a family holiday, the cost of alcohol was it’s only downside. For UK residents - up to three times the cost of a British pub.