Five Wonders of the Mediterranean from Barcelona, 10 October 2020 (7 nights) 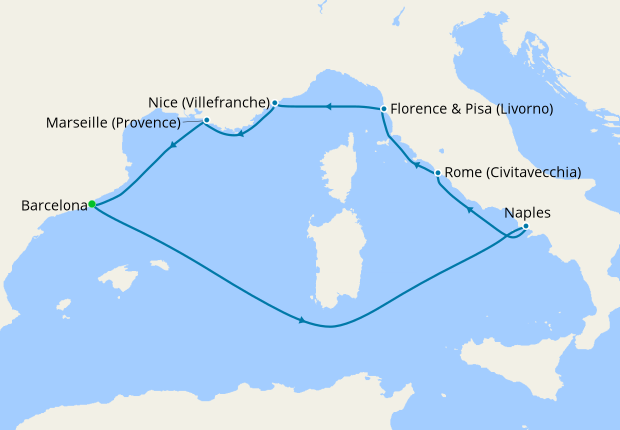 Cabins on the Sovereign

Very disappointing. Was our first ever cruise. If you are English You will struggle on the cruise we went on ( 5 wonders of the med) It’s a very Spanish speaking boat, all the excursions are in Spanish Which is not really explained when booking on board. The digital information boards on board are all in Spanish even the safety rules by the pool are not in English. Not enough for teenagers to do on board ? When you look it states a sports court and a climbing wall No climbing wall and the sports court is an extra charge. If we book another cruise we will study it more carefully and ask more questions when booking to what we can expect???????

I meant to write this review on our return from our holiday last year mainly as there are very few English perspective reviews of Pulmantur cruises around. However I forgot and have only been prompted by seeing Iglu Cruise are advertising Pulmantur cruises again. My wife and I decided to go on our first cruise in October 2018 and picked the the Five Wonders of the Mediterranean with Pullmantur because we had not been to any of the destinations and the cost was very reasonable for an all-inclusive cruise. Firstly you should be aware that Pulmantur cruises are basically aimed at catering for Spanish holiday makers. Spanish is the first language spoken on the ship and the main evening entertainment is predominently in Spanish, although some effort is made to translate some in to English and French (not German though). That said we didn't have an issue at all with that. The crew were international (about 25-40 different nationalities including a Russian captain) and almost all spoke English. There was no problem ordering from the bar, booking excursions or finding your way around. There was also an officer in charge of international customers (of which there were just over 100 I think) and there were some briefings held in English and French). If you want to go on excursions they do run English language ones at each port, but if you book in advance of travelling, you may find it changed to a different but similar one on board ship as they need a critical number of passengers booked to run it. We were told that there would always be an English speaking trip run at each port and that was our experience. We also found the trips to be excellent. (We visited Barcelona before departure, Naples and Pompeii, Rome, Florence, Pisa, Monaco and Monte Carlo, Nice and Sete). We don't have anything to compare it with, but thought the Sovereign was a lovely ship, a little tired in places, but still vibrant and elegant. It is an older ship, built in the eighties, but since refurbished and at the time it was commissioned, I think, the largest sailing. It has all the amenities that we would expect on a cruise ship, with several choices for dining, with a buffet restaurant, grill on one of the sun decks, more formal main restaurant (which runs two sittings, you will be allocated a time when you book) and speciality restaurants which we didn't use. We found the food and drinks to be excellent especially as the all-inclusive was included in the cost. There are several varied bars as well and a small casino. We had booked a junior suite (basically all the cabins with balconies were junior suites or better), but the cost was still reasonable. It also had the advantage of priority boarding and disembarkation at the beginning and end of the cruise, and included membership of 'the waves' club which allowed access to a private bar and restaurant for breakfast which was a bonus. We found staff to be helpful and friendly, especially the cabin steward and waiters in the main restaurant. So we had a really fantastic experience and couldn't fault it. However I appreciate it may not be for everyone. The buffet did seem to get very crowded at peak times (we waited for the rush to die down) and the lack of English speaking at the main entertainment may be an issue for some. Also we have not sailed with the major league cruise lines yet, so this may not meet seasoned cruisers' expectations. You will have to ask Iglu for their advice on that.

The Cruise was brilliant and the staff were fantastic, very kind and friendly. The food was outstanding. Have already recommended to friends.

Note: On 13 January 2018, new European legislation is being adopted in the UK which as result will mean that we may change our required method of payment at our discretion, irrespective of how any deposit or prior payment was made.
Speak to a Cruise expert 0203 848 3629
Close