Discover the world's most intriguing ports while travelling in the extraordinary style aboard Silversea's intimate luxury cruises. Silversea is committed to offering unrivalled service and an exceptional on-board experience. All-suite, ocean facing accommodation comes with butler service and superior extras, from designer cosmetics to a bar stocked according to preference. Exquisite dining, champagne, wine and spirits; and onboard gratuities are always included. With unique itineraries, including smaller ports of call where big ships cannot go, Silversea sails to more destinations than any other cruise line and offers the ultimate experience in luxury cruising. 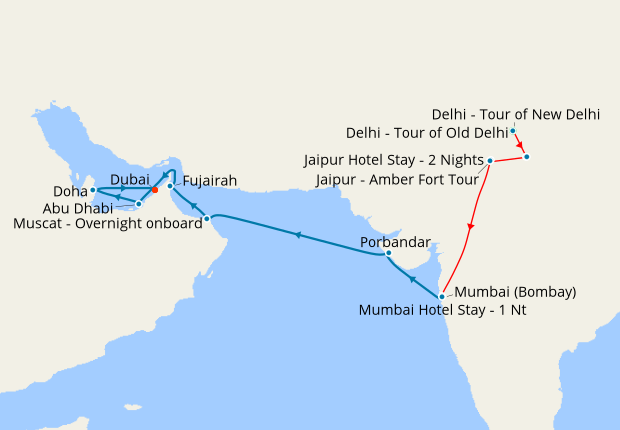 Day 2: Arrive in Delhi and transfer to your hotel for a 2 night stay.

Shah Jahan founded the city of Shahjahanabad, now referred to as Old Delhi, in 1648. The famous Red Fort in the heart of Old Delhi was once the most opulent fort of the Mughal empire and it boasts the Diwan-i-Am, Hall of Public Audience; and the Diwan-i-Khas, Hall of Private Audience. A short drive from the fort is the Jama Masjid, one of the largest mosques in the world, built by Shah Jahan to dominate his city. The Raj Ghat is the location of Gandhi's cremation. Your tour will include visits to the Jama Masjid mosque, Raj Ghat and the Red
Fort.
Lunch at a local restaurant.

Excursion: Afternoon tour of New Delhi
When the British chose Delhi as their capital in 1911, they appointed two architects, Sir Edwin Lutyens and Sir Herbert Baker, to plan and build a new city to rival the fabled cities of the Mughals. New Delhi was thus built in true colonial style with tree-lined avenues, colonial bungalows, the Parliament House, the War Memorial Arch and the Viceregal Palace, now the official residence of the President of India. Alongside these British architectural gems are several monuments commemorating other occupants of Delhi including the Emperor Humayun and the Muslim saint, Nizamuddin Auliya. Indigenous Indian monuments include Jantar Mantar, the observatory built by Raja Jai Singh of Jaipur, and the Birla Mandir, a modern marble Hindu temple. During your tour you will drive past India Gate, the President's Palace Parliament House and other government buildings. You will also visit the tomb of the Mughal Emperor Humayun, and the pre-Mughal monument - Qutb Minar.
Meals: Breakfast and lunch

Day 4: Road Journey: Drive from Delhi to Agra, a distance of 202km and journey time of approximately 4 hours.

Excursion: Afternoon visit to the Taj Mahal and Agra Fort
Visit the Taj Mahal this afternoon. Built by Mughal Emperor Shah Jahan, the magnificent white marble mausoleum commemorates the life of his favourite wife, Mumtaz. The classical gardens with their shimmering mirror pools create the perfect backdrop to this truly breathtaking sight. Continue to the red sandstone Agra Fort and discover the many chambers and elaborate archways. Meals: Breakfast

Day 5: Road Journey: Today you will drive from Agra to Jaipur, a distance of 235km and a journey time of approximately 8 hours including a stop for lunch (payable locally) and a visit to Fatehpur Sikri.
The magnificent deserted red sandstone city of Fatehpur Sikri with its forts, palaces and mosques is located 37km from Agra. The city, designed as a tribute to the Sufi saint, Sheikh Salim Chisti, who had predicted the birth of Akbar's son and heir, was begun in 1571 and was abandoned just 15 years later due to a shortage of water.
Meals: Breakfast

Day 6: Excursion: Morning visit to Amber Fort
The ancient Rajput capital is located on a hill 11km north of Jaipur. Amber was the capital of the Kachhwaha Rajputs from 1037 until the Maharaja Sawai Jai Singh founded Jaipur in 1727, but the majestic fort-palace was not begun until about 1600. The building was added to by successive Rajput rulers, however, the architecture displays many Mughal influences in addition to the traditional Rajput designs. Whilst visiting the palace you will be able to explore the intricate chambers and hallways, the maze of passages and courtyards and witness the wonderful views of the Jal Mahal water palace below. En route to Amber, there will be a brief photo stop at the 'Hawa Mahal', known as the Palace of Winds. Built in 1799, it is a remarkable facade structure, constructed of red sandstone overlooking one of the main streets, specifically meant for the ladies of the Royal family, who would sit behind the trellis screens and comfortably observe the activities on the streets without being seen.

Excursion: Afternoon city tour
Take a tour of the royal city of Jaipur with a visit to the City Palace, which is still inhabited by Jai Singh's descendants and is a superb fusion of Rajput and Mughal architecture. A city within a city, it includes the Jantar Mantar astronomical observatory and the City Palace museum with a fine collection of weaponry, miniature paintings, royal attire and jewellery. Visit the “Anokhi Museum of Hand printing”; situated in the shadows of historic 11th century Amber Fort. The museum was established in year 2005 with a thoughtful initiative to preserve and conserve the art of traditional hand printed textiles from the celebrated towns of Sanganer and Bagru. It is probably the only museum of its kind in the world where one can observe the entire consuming and exhausting method of hand-block printing from the carving of wooden blocks to the transformation of raw fabric into a piece of art. Also during the city tour indulge in sweet tasting at one of the local restaurants.
Meals: Breakfast

Day 7: Transfer: You will be collected from your hotel and taken to the airport
Meals: Breakfast

Cabins on the Silver Shadow