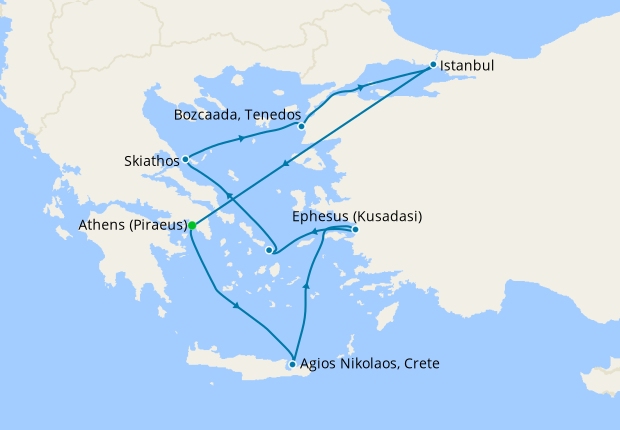 Cruises on Seabourn Encore
Fly from the UK

Just a short distance away from Kusadasi, Ephesus is one of the best preserved ancient cities in the world. Built by colonists in 10BC, this city is renowned for the Temple of Artemis, considered one of the Seven Wonders of the Ancient World. A visit here is a must for history-enthusiasts, as well as those looking for beautiful beaches, relaxing in the sun and dancing the night away in the nearby resort town of Kusadasi. Discover breath-taking ruins by day and the best discos by night.


Things to do in Ephesus (Kusadasi):

This was our third cruise on board the Encore, and we loved it. Food and drinks were amazing, with no expense spared, especially at the Thomas Keller grill. Professional, yet friendly staff and a very comfortable ship. Our only slight reservations are the availability and speed of wifi connection and the quality of excursions offered, (we booked our own, independently). Rated as a 6

WE have sailed on all Seabourn ships,from the smallest,the medium,Odyssey,Quest and Sojourn and now the "Flagship that would blow you away" the Encore. Yes the ship is beautiful,the suites are fine as are the public spaces.Only THE GRAND SALON deck 6 is too small,therefore there are TWO shows now.The result is that the dining room is too small for the people who want to see the 8.45 show,it is a cafetaria,with sweating waiters,wine throwing sommeliers,very average food,unhappy customers. As a whole after many happy sailings no more Seabourn for us.When complaining to Seabourn headquarters,the answer was: We are sorry,but your complaint is not typical and have a nice continuation! Well there goes "The best small ship line!! Why not rename Seabourn in Carnaval Boutique?

After reading the one and only shocking review I had to give my opinion. We went on the second leg of the inaugural cruise over Xmas and New year. It was its usual high standard in all areas. We have cruised with this line for about 8 times and have been more than happy. Have booked again in December on one of their other ships which we have cruised before. Will leave a comment after that one.

How disappointing. This was our 24th cruise and after a lot of research we thought we had found the perfect ship. Having been spoilt by Oceania and Viking cruises we expected the same standard of service and having watched all the advertising videos of "Surf in the Turf" and "Molton Brown" products we were jaw dropped at just how bad our experience was. There is simply not enough staff and staff with no experience of what six star service should be. I often felt like I wanted to take charge and help them. It was chaos. The pool area is not in the same league as the other ships at this level. The ship was grubby in parts with sticky bars and rails. Always waiting or a drink. I waited 40 minutes for drink one afternoon. The restaurants were even worse to point were I was dreading going out to get something to eat. No buffet or casual dining anywhere. All A La Carte. All full. Couldn't get in anywhere. Again and again. Told to come back in half an hour. We might as well have been on a P and O. I was served quicker on Fred Olsen. I don't like eating in my suite as I sleep there but I had to concede to room service. When it finally arrived it was cold. I rang to give feedback and I received attitude and back chat rather than an apology. I have never written a review before. But I simply don't think it is fair that people pay so much money for so little return. This was out 10th wedding anniversary trip and we feel so disappointed. I could go on and on and on. No laundry. Expensive prices for the service and it came back stained and creased. Molton Brown products are actually tiny tubes that I had to ask for replacement all the time. Should have just took my own. The club. Now and again managed to create a slight party atmosphere. As it was just getting lively the group had a "break". Lights on. All went quiet. Everyone went to bed. Killed it. Paddys night. OMG. They called it Pattys night and it was like watching a school play. Again I wanted to jump up and help. My husband said it was Fawlty Towers. Thankfully our trip was around Australia. We have never been before and it blew me away. What an amazing place. The trips were really amazing. I absolutely loved it. I spoke to other passengers, many of whom were regular Seabourne addicts and they said the other ships are far better. I think it's put me off new ships as they need time to get things right. Back to Oceania for me x

Note: On 13 January 2018, new European legislation is being adopted in the UK which as result will mean that we may change our required method of payment at our discretion, irrespective of how any deposit or prior payment was made.
Speak to a Cruise expert 0203 848 3639