Includes Have it All Premium upgrade! 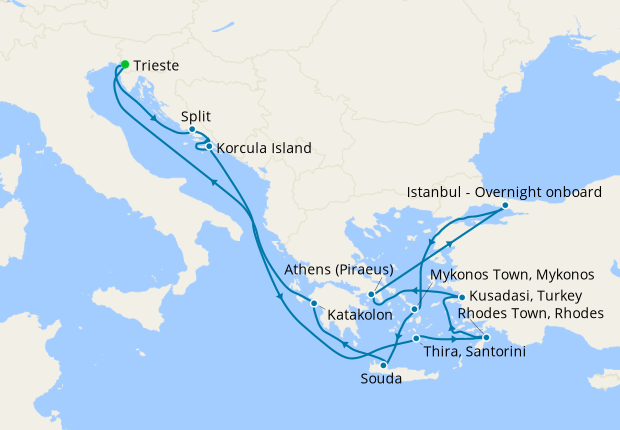 Surrounded by lush vineyards, olive groves and picturesque villages, the island of Korčula will take you back in time. Tradition is very much celebrated here, with ancient ceremonies, music and dances a common sight to see. As well as historic sites and beach-going, you can sample some of the best Croatian vintages produced locally from indigenous grapes. If you’re looking for a laid-back getaway with a very warm welcome, Korčula is for you.


Things to do in Korcula Island:

You will be at sea on day 4 while travelling from Korcula Island to Thira, Santorini.


Things to do in Istanbul - Overnight onboard:

The sleepy seaside village of Katakolon is perhaps one of the biggest tourist highlights of Greece, thanks to its close proximity to Ancient Olympia. With sparkling turquoise waters, numerous traditional tavernas and the warmth of a friendly, local community, Katakolon is the perfect place to explore on foot in the sunshine, where you’ll find museums, bars, restaurants and souvenir shops, as well as horse-drawn carriage rides and even a Beer Bike!


Things to do in Katakolon:

You will be at sea on day 14 while travelling from Katakolon to Trieste.

Fabulous ship. Great service and food. Loved the music in bb kings and the classical as well

I was on this ship last year and enjoyed it very much. The staff were friendly and the food was good. Too much at times! Would go again

Just cruised on this ship. The staff are exceptionally good, particularly in the restaurant and the people who take care of the cabins. The problem, as far as we were concerned, was the temperature of the dining room and the theatre. It was Cold! Who takes warm clothes on a cruise.? The food was frequently cold. The coffee was inevitably cold. When requested, the staff would bring hot coffee. The portions of steak were generous and very good. The fish was also good but small, which suited small appetites but felt sure some would find it insufficient. The shows were disappointing. The drinks expensive. Cheaper to organise your own sightseeing visits. The embarkation was horrendous. The passengers were mostly friendly.

Overall the ship were very good. The service onboard was very good with the steward and laundry service being exceptional. The excursions are overpriced and passengers would be better off arranging a local tour once they have disembarked. Each port had many options for booking excursions from taxis to vans. We ordered wine packages before the trip and were told that we would be able to use our wine not only in the restaurants but in the bars as well. When we inquired in the bars the waiters said they did not have time to get the wines which we had ordered. The first 48 hours of food service was served by the staff in an effort to thwart any possible infections that may have been brought onboard. The captain's frequent reminders about hand washing, etc. were helpful. The menu in the Pinnacle restaurant became a little tedious after four dinners there. There should be more options.

Overall the ship was very good. The services on board was very good with the steward and laundry service being exceptional. The excursions are overpriced and passengers would be better off arranging a local tour once they have disembarked. Each port had many options for booking excursions from taxis to vans. We ordered wine packages before the trip and were told that we would be able to use our wine not only in the restaurants but in the bars as well. When we inquired in the bars the waiters said they did not have time to get the wines which we had ordered. The first 48 hours of food service was served by the staff in an effort to thwart any possible infections that may have been brought onboard. The captain's frequent reminders about hand washing, etc. were helpful. The menu in the Pinnacle restaurant became a little tedious after four dinners there. There should be more options.

My husband and I took a cruise on last september and it was the most amazing time we had have in our lives so far. We went to Alaska and Victoria Canada. The ship was incredible: very clean and modern; the staff couldn't be better: very courteous and always around when we needed something. The food was great no matter where: the buffets or the restaurant. We had a cabin with a balcony and the views were breathtaking. We really enjoyed the tours in all the ports. The food was awesome everywhere we went. We usually don't repeat when on vacation, but this cruise would be a repeater.

We had a great trip and loved the Oosterdam. The food was amazing, especially the seafood selection (salmon, shrimp and lobster tails.) of the Main Dining area. The Pinnacle Grill were also our favorite the strip steak, ribeye was truly amazing. The drinks on Oosterdam was better than other cruises we had been, The cocktail were strong and hand mixed. Not to forget about the good selection they have. The entertainment were similar to other ships. The Magician were fantastic, by far one of the best we have seen while at sea. But if you are a non smoker, beware a lot of smoker don't care about the non smoking sign on the ship.

Note: On 13 January 2018, new European legislation is being adopted in the UK which as result will mean that we may change our required method of payment at our discretion, irrespective of how any deposit or prior payment was made.
Speak to a Cruise expert 0203 848 3608
Close