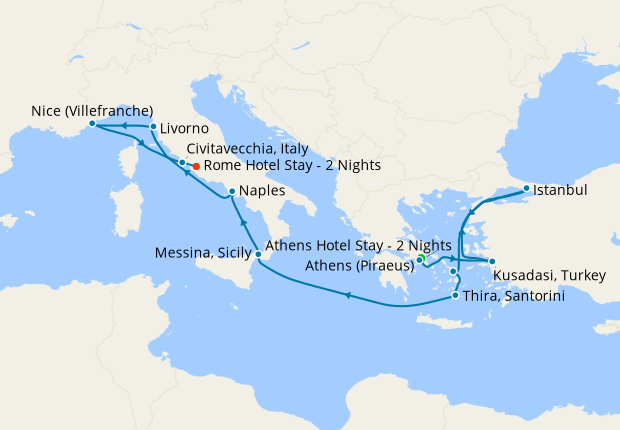 You will be at sea on day 8 while travelling from Thira, Santorini to Messina, Sicily.

Livorno is the third most populous city in Tuscany, after Florence and Prato, as well as one of the most important Italian tourist and commercial ports. It did not hold the same importance as nearby Pisa at the time of the Maritime Republics, however. Today it is a highly modern city while rich in historical evidence of the past. You can visit the historic district of New Venice, the Old Fortress, the Mascagni Terrace, and the aquarium.


Things to do in Livorno:

A popular holiday resort with people from all over Europe since the 19th century, Nice is one of the top spots on the beautiful French Riviera. A stroll down the Promenade des Anglais is a great way to admire the scenery and pebbled beach before heading to the pleasant harbour - a fantastic spot to enjoy some seafood in the sun. After dining, head up to the gorgeous gardens atop the old castle for unrivalled views out over the whole city and bay.


Things to do in Nice (Villefranche):

Note: On 13 January 2018, new European legislation is being adopted in the UK which as result will mean that we may change our required method of payment at our discretion, irrespective of how any deposit or prior payment was made.
Speak to a Cruise expert 0203 848 3620