Royal Caribbean's MEGA Savings Flash Sale!
for this weekend only, up to £700 Savings + reduced low deposits*
Cruise Only Flights not included 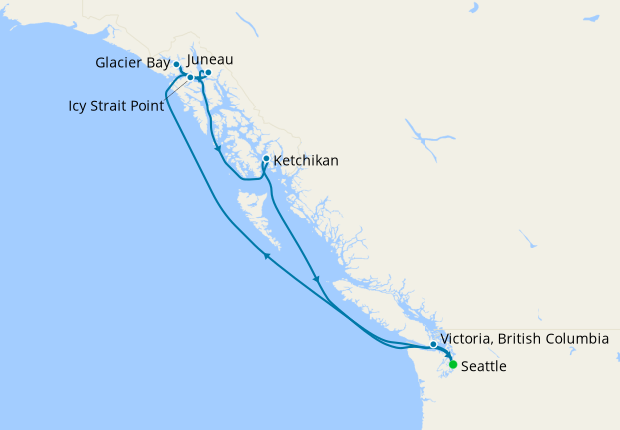 
Things to do in Seattle:

You will be at sea on day 2 while travelling from Seattle to Juneau.


Things to do in Juneau:

Glacier Bay is a microcosm of Alaska's wonders and a living testament to what resilience truly is that'll take your breath away. Here you’ll find outstanding views everywhere you go, from the highest snow-covered peaks to the enigmatic glacial fjords scattered throughout, and inspired to want to know more about the wildlife and awestriking scenery around you.


Things to do in Glacier Bay:

With lush rainforest and vast waters all around, Icy Strait Point boasts beautifully preserved habitats as well as thrilling outdoor activities that cannot be found anywhere else. From whale-watching cruises where visitors are guaranteed to spot the magnificent mammals, to riding the world’s largest ziprider, there’s no shortage of activities the whole family will love. As a privately owned tourist destination it’s also able to support the surrounding Alaskan Native population.


Things to do in Icy Strait Point:


Things to do in Ketchikan:

The capital of British Columbia, Victoria sits just below Vancouver looking south and east over the Salish Sea. The city has a number of attractions such as the old carousel, Royal BC Museum Craigdarroch Castle and Chinatown district. However, the highlight of Victoria is its surrounding natural beauty where a tour is a must to Thetic Lake Regional Park. Here, you can explore the wonderful nature by hiking trail and sport wildlife such as eagles.


Things to do in Victoria, British Columbia:


Things to do in Seattle:

We were on a cruise to South America starting on the 9th. March, 17, visiting Chile, Falkland Islands and Argentina. Before the cruise, we stayed 3 nights in Santiago, in Santa Lucia District. Its in a Local residential area, full of hotels, bars and restaurants. Its very near the main shopping malls and the place where we stayed in, was quiet at night. We had booked TUR BUS on line before departure from UK and on the day of sailing we took a taxi from Santiago to Valparaiso for the bus to the port. The bus stops well away from the ship port and you have to take a taxi to the port. It costs us$12 in total and worth it.While waiting to check in at the port for ship embarkation, there was no announcement that the ship could not come to the port because the berth was taken up by a cargo ship. After waiting for over three hours, we finally boarded the ship. We have been sailing with NCL over a number of years and have visited almost all the ports of call in USA, Canada and Europe. We have been on this ship before but the facilities have been run down to cut cost. The quality of food did not vary from day to day, the entertainment on the ship was worst than before, there was no parties on the pool deck when on sea or Barbecues as before. Although the staff in general were quite helpful and courteous but watch out for the security check when disemarking at ports. Securitykept on telling the customers to put their DINEROS(loose change) in the small tray she was handing out. When customers put their money in the tray, she said its all right, don't worry about it and she had problems with customers who found it hard to understand why is she saying one thing and then saying don't worry about it. I wanted to go out to the port and handed in my card. She swiped the card and as I was about to go she said wait and after couple of minutes, said you can go. When I asked her for my card, she said that the tender is coming and I have to wait. You can see the problem she has caused and its the customer who is blamed for everything and not the staff. Otherwise the cruise was fantastic and the weather was excellent going round the Cape Horn and very sunny and virtually no wind in Port Stanley. The NCL Sun is more likely to be replaced by NEW ship BLISS but its time for NCL to look at the behavior of their staff towards their customers.We definitely would not sail on NCL Sun again because of poor management, lack of entertainment, which is the worst I have seen on any of the NCL line, the cruise director laughs at his own jokes and does not think outside the box. Its time for NCL to either train their staff to be customer friendly or fire them, get another cruise director and entertainment staff and variety of performers and not the same old performers on the ship coming two or three times doing the same things.

BA flight to Tampa 4/10 Tampa Hotel 7/10 This was our first 'normal' cruise previously done Star Clipper x 2. The advice and suggestion from Saam was spot on, the ship was the right size for us, we saw the Epic in port and that really is too big! The experience was very enjoyable and I have no major complaints. The ship is 14 years old and showing a bit of 'wear and tear'. The main buffet area is OK but like a motor service area, however the food was good and lots of choice, the 'free style' dining definitely worked for us. The speciality restuarants were very good, we tried French, Brazilian and Tepanyaki. The two main restuarants Seven Seas and Four Seasons were generally good, service was great, food was average. Our cabin was great and service A1. The onboard facilities were good, we always got a sun bed and pleanty of room on the decks. The spa was pricey and not good value, sales pitch is quite heavy and it is easy to be 'confused' with the costs. The shows ,jersey Boys &amp; We will Rock You' were amazing, as good as West End shows. The bar service was hit and miss, often slow and not as customer service focused as other services, maybe because they are not on the tip rota? The wifi was very expensive.

Dear all This was our first cruise - we had no expectations and we were not really disappointed. Seasoned cruisers will tell you that the ship was not the best, in fact not good at all compared to other lines and ships. The price we paid, the value was very good. Please be aware that the ship deals in dollars, if the rate for sterling is low everything is v expensive! If you get a good deal - go on the trip - if you are looking for a cruise with all the trimmings - don't bother.

The ship was very clean and the staff overall very good. Some would even help you with opening the heavy doors. Our cabin staff were excellent. Clean towels twice a day and nothing was too much trouble. There were two resident groups singing during our 3 week cruise through the Panama Canal, needless to say they repeated songs on a daily basis and never upped the beat. The food was great, only one comment and that was in the Pacific Heights Restaurant the menu stayed the same for 3 weeks. Not sure why.

Note: On 13 January 2018, new European legislation is being adopted in the UK which as result will mean that we may change our required method of payment at our discretion, irrespective of how any deposit or prior payment was made.
Speak to a Cruise expert 0203 848 3612