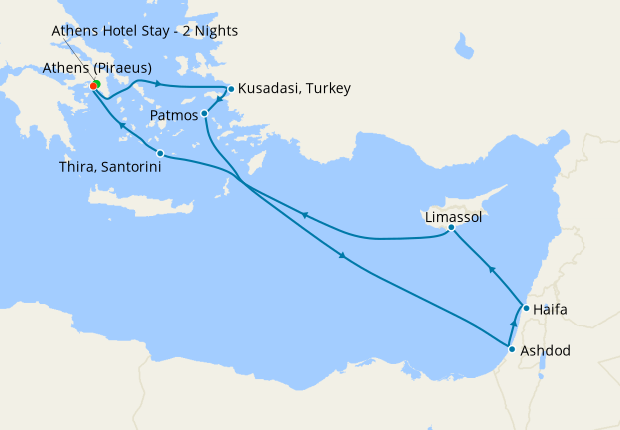 Perfect for nature-lovers and history-enthusiasts, Patmos is widely known as the place where Saint John wrote the Book of Revelation. For this reason, it’s teeming with religious monuments, particularly in medieval Chora. Regardless of your faith, a trip to Patmos will be an incredibly inspiring and humbling visit, bringing you to some of the most holy places in the world.


Things to do in Patmos:

You will be at sea on day 5 while travelling from Patmos to Ashdod.

From the thrilling waterpark to the immersive zoo that’s perfect for all the family, to ancient castles and an archaeology park, Limassol is a hidden gem in Cyprus. At the heart of the city is Limassol Castle, home to a grizzly history and the Museum of Cyprus which is well worth a visit to uncover more about this city. Don’t forget to make time to visit the buzzing bars, cafes and restaurants for authentic Cypriot cuisine.


Things to do in Limassol:

Cabins on the Norwegian Jade

Very good overall but not quite what we envisaged our holiday to be. We like a nice steady holiday at a fair pace but felt the holiday was a bit hectic and not what we have had on previous cruises we have been. It was described as freestyle but felt like it was a free for all. We wanted a little quieter and more relaxing atmosphere with out having to get of the ship. The ship and staff we could not fault - it was the whole theme of the holiday which it wasn’t for us.

I took my 90 year old Mother on this cruise who uses a wheelchair most of the time, and the cruise was excellent. We couldn’t fault anything about it and have left a deposit to go again in the next four years but I can’t wait that long. We we all inclusive so food was no problem, just a very high standard and all staff were so helpful throughout the ship. The air conditioning in the ship was a little too cold for me but that is the only comment to make. Thank you for a very memorable time especially with my Mum who was very impressed.

This was our first time on the Jade and my wife and I had a wonderful experience on board. The stateroom was lovely and the crew were very helpful. The entertainment was superb in the Theatre and in the bars. For the quiet drink after dinner I would recommend the Whisky Bar on deck 6 its an ideal spot to people watch.

Second time I have booked with Iglu. Paul who I dealt with was very helpful,friendly and informative. Everything to do with our holiday,transfers, flights etc worked out. Enjoyed our holiday on Norwegian Jade nothing really to fault, they are more informal than other cruise ships so depends what you want.

We went on our 1st Cruise ....left Miami and sailed away on Jade to Belize and Mexico. We had a wonderful time, food was excellent.....everyone on the ship, treated us very special. We loved our cabin with a balcony and it was nicer than we ever thought it would be. We did 2 excursions, in Belize we parasailed for the 1st time.....great adventure, would do it again in a heartbeat!!! In Costa Maya we did the Dolphin Encounter, we loved it!! I would recommend either of these to anyone looking for something exciting to do when you are off the ship. We will sail again, very happy with our 1st 5 day cruise on NCL...Thank you for the great experience....

The ship was amazing, food was good though at times cold from the buffet add we kept on hot plates but only on half of it's We booked our excursions through uglu, but found some things disappointing, like no instructions on where to meet your rep, and then up to a Ten minute walk too get to the coach, for me who is disabled I found that unacceptable. Also the time at some of the places visiting was limited, I couldn't see the place well enough as not enough time.

Norwegian Jade Norway cruise 25th August 2018 Pros Ship has recently been refurnished Ship looks fresh and clean. Good embarkation Southampton Good entertainment Negatives Very poor slow overall service in dining rooms Food in garden cafe was only warm at times not hot. Bar staff could be a bit surly and standoffish ,very hard Work most of the time. Lazy cabin steward who didn't introduce him self to us and no name card in cabin . Cabins not made up till late afternoon . Extremely expensive trips (extortionate prices) NCL don't let you know when the Captains cocktail party is you have to ask at reception. Confusing inclusive drinks package and Service charges. Didn't no that we had on board credit till last day of cruise. Every thing seems to be secretive ,on a need to know basis. You don't get anywhere with them unless you complain. But I don't go on holiday to complain I just expect a reasonable Standard of service. I know NCL can do better than this what happened to the old NCL ,definitely don't like the new.

The problem we had was a loud noise under floor and into corridor which other staterooms either side and below us also experienced when ship sailing. The ship was fully booked we were told but we were put on a list to move staterooms if anyone left the ship. It was on day 6 of 9 that we were offered this as one had become available. The holiday despite this situation we enjoyed all the ship had onboard and the service of the staff we engaged with. The ports were varied and interesting. The joining and leaving were easy and well organised. The dinning options great and more relaxed dress option welcome.

Although the cruise was very good, the service on board left much to be desired, we were very disappointed with the standard of the entertainment, not up to the standard of previous cruises.The service in the restaurants with the exception of Jasmine was horrendous,with very long waits, cold food and being totally ignored by the waiting staff. We went to our cabin on boarding and found it to be made up to a double cabin we asked 4 times for this to be rectified to a twin and eventually after a few hours this was done, although the cruise was now all inclusive there was now a charge for room service, which was not there on previous cruises. all in all not the standard I have come to expect from Norwegian Cruise LInes.

An absolutely fantastic experience! This was our first cruise and we are definitely hooked - the ship was amazing, there was loads to do and see, we didn't get around to even half of the things on offer. Every single member of the crew we met were so friendly and attentive, nothing was too much trouble. The entire ship was spotless and the rooms comfortable. We are already looking to book again for next year :)

We travelled as a family of 4, spending 2 days in Hamburg and then a 2 day cruise on NCL Jade from Hamburg to Southampton. The Jade is a lovely ship and the crew were all pleasant and hard working. The ship is immaculate and the cabins very comfortable. However, the food quality was quite disappointing. The entertainment was mixed, some good and some not so good. We all enjoyed the 2 shows in the main theatre. The downside of the holiday was that we had booked 2 cabins side by side midship. When we arrived NCL had only given us one of the cabins we had booked and moved myself and my daughter to a cabin on a different deck at the front of the ship. I had made the booking myself and had it in writing that we had cabins 9102 and 9104 midship near a lift. The move to a different cabin was supposed to be an upgrade but I had not asked for this and had chosen and paid for the midship cabin. I am going to take this matter up with NCL. Another upset was that Iglu had booked us a private transfer from the hotel in Hamburg to the ship. The transfer didn't turn up and we had to make several phone calls to the transfer company before a car finally turned up 3/4 hour late. If we hadn't phoned it wouldn't have come at all.