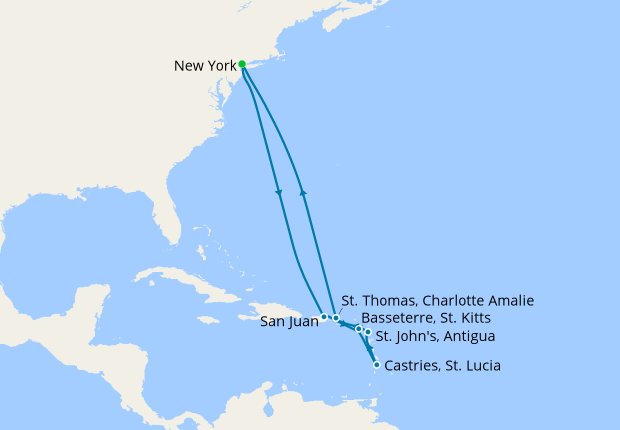 Cabins on the Norwegian Gem

The ship was clean and comfortable but a bit cramped and noisy. The Stateroom was on the small size and very little room to get comfortable, furniture was badly laid out and for example, there was no bedside table on one side of the bed. The carpet fitted very badly around the room and very little desk space to do anything. Too stay less than 5 hours in Port on a number of occasions was totally unacceptable and managing embarkation and disembarkation at times were at best chaotic. The entertainment was not up to the required standard and the board games were quite often missing pieces. The Steam room was inefficient and was not switched on early enough for maximum efficiency However, I found the staff to be helpful and courteous and they should be congratulated for that.

We did the 2 nights Niagara, 3 nights New York, 10 days cruising on the Gem in February. This was our first visit to North America and our first ever cruise (so cannot compare to other lines), and we had a great time, although wouldn't go to Niagara again now we have seen the falls. We stayed at the Sheraton, which, according to reviews, is just about the best mainstream hotel available and ate in the buffet restaurant (1 dinner & 2 breakfasts) - a bit pricey but good and with fantastic views. The area around the hotel is very tacky with amusement arcades etc and not to our liking. Included transfer to train station to catch the Amtrak to NYC was fine, luckily got there early as within 1/2 hour was absolutely packed with Brits doing the same itinerary. Yes, the train was slow (total journey around 11 hrs) but we didn't mind as seats were comfortable. Husband queued for 2 hrs for coffee but, as he said, he didn't have anything else to do! Took taxi from Penn station to our hotel - The Marcel at Gramercy, which was fine for us, although compact, with a view of the Empire State Building. Had great 2 full days in NY - did 9/11 museum, Top of the Rock, brunch at Grand Central etc. Thoroughly recommend Bluebell Cafe near hotel, especially Sunday brunch. Included transfer to Gem very disorganised, our 'private' car was booked for 11.30 but we didn't get one until about 1pm and then had to share it. The same happened with included transfer from Gem to JFK at the end of cruise. Anyway, on to the Gem. We loved it. Yes it is geared up for the American customer but there were quite a lot of Brits and other nationalities on board and, believe me, obnoxious and loud individuals come from a variety of countries including the UK. Luckily the ship is big enough to get away from them! We ate in the MDR most of the time and found the food and service very good. We had bought the 3 nights speciality dining package but really didn't think it worth it or necessary. Always good choice available in buffet, especially at breakfast time. The drinks package was included in the deal and it was great not having to worry about the final bill. Our balcony cabin was midships on Deck 9 and very comfortable, especially the bed. We took 3 excursions with NCL as rookie cruisers, which were a bit pricey but very enjoyable. We loved the musician Leo who played guitar and sang in the evenings but didn't go to entertainment in the theatre once, so can't comment. A great first cruise and we are definitely hooked, having booked another one, this time sailing from Southampton, within 2 weeks of our return!

Just returned from a ten day Caribbean cruise on the Gem. A great cruise and a superb experience overall. Only criticism is that because NCL is American owned we had to pay gratuities on everything we bought from the bar (we didn't have full drinks package). I don't mind tipping people that I choose to tip but resent that it is compulsory.

Note: On 13 January 2018, new European legislation is being adopted in the UK which as result will mean that we may change our required method of payment at our discretion, irrespective of how any deposit or prior payment was made.
Speak to a Cruise expert 0203 848 3612
Close
﻿