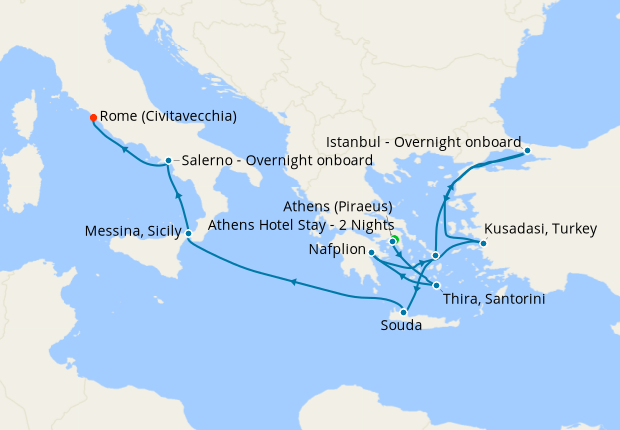 You will be at sea on day 4 while travelling from Athens (Piraeus) to Thira, Santorini.

You will be at sea on day 8 while travelling from Kusadasi, Turkey to Istanbul - Overnight onboard.


Things to do in Istanbul - Overnight onboard:

You will be at sea on day 13 while travelling from Souda to Messina, Sicily.


Things to do in Rome (Civitavecchia) - Overnight onboard:

We are not regular cruisers and have not been on any Holland America ships before so we were not sure what to expect. However, we were very impressed with every aspect of the cruise from the stateroom, service, food and great music and artwork. The experience has restored our faith in cruises and we would certainly sail Holland America again.

Excellent facilities and staff. Entertainment was good. On board expenses and excursions were a little high but overall a very good holiday. Please organise better weather next time (if at all possible!)

Sailed to the Norwegian fjords. Majestic as ever. Lovely new ( and happy) ship. Stylish, not as brash as publicity photos suggest. The big production stage shows disappointing but the young classical musicians were terrific and the BBKing blues and jazz sets were the perfect way to round off the evening. Food and service in the main restaurant and Lido buffet so good you can forget the speciality restaurants and extra cost. And the Orange Club exclusive restaurant looked soulless. We sailed from Amsterdam - understandably 50% of passengers were Dutch. All Service charges a bit high and drinks weren&rsquo;t cheap either. But then they never are!

We booked a seven day cruise Amsterdam to Norwegian fjords. We have sailed with Holland America once before on the Westerdam which is more elegant especially the dining room which on this new ship is souless and brash looking - very tacky lighting and cheap looking decor. The food in the dining room was disappointing. The Lido food was plentiful and varied but not necessarily that tasty. Lack of good fresh fruit. Regarding entertainment we thoroughly enjoyed the Lincoln stage classical concerts featuring a quintet which was superb. There was no musical show in the main theatre which was disappointing. The BB King band were also excellent. My biggest concern was that the hand sanitizers were not placed appropriately at the entrances to the various eating venues so you could easily miss them as I'm sure many passengers must have done. I feel people need constant reminders to use these and there were none. The staff were fantastic and delightful. We have cruised around a dozen times over the past few years and in sorry to say we would not book on this ship again.

Note: On 13 January 2018, new European legislation is being adopted in the UK which as result will mean that we may change our required method of payment at our discretion, irrespective of how any deposit or prior payment was made.
Speak to a Cruise expert 0203 848 3620