Covid-19 Travel Requirements
Queen Anne Now on Sale for Past Pax!
- Be the first to sail on this incredible new ship on it's maiden season!
Cruise Only Flights not included 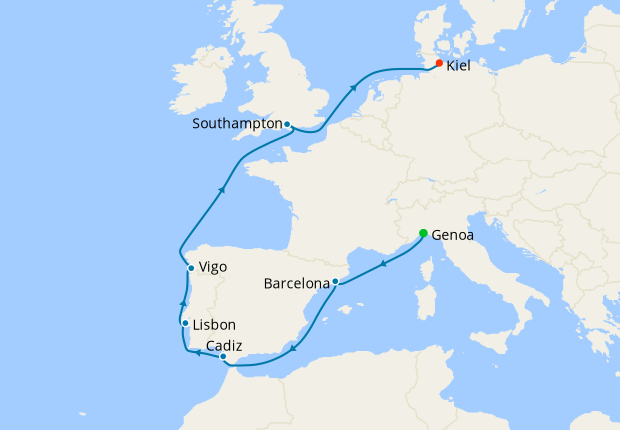 The historic city of Genoa has played a pivotal role in Italy’s past, particularly when it comes to maritime endeavours. One of the world’s biggest shipbuilding yards – Fincantieri – is located here, and Genoa is also hometown to the famous explorer, Christopher Columbus. You can easily imagine the hustling, bustling travellers and traders of years gone by as you wander in the Old Port, and relive history in Piazza de Ferrari, and the mansions of Via Garibaldi. Sip on delicious wine and enjoy the very best seafood dishes in this pretty yet industrial Italian city.


Things to do in Genoa:

You will be at sea on day 3 while travelling from Barcelona to Cadiz.

Considered one of the oldest continuously inhabited cities in Europe, Cádiz charms every visitor who sets foot there. It’s 3,000 years of history are just waiting to be discovered through its monuments, museums, and winding streets, with Cadiz Cathedral being a real highlight. Families will love Playa La Caleta which has all the amenities needed to spend a whole day on the sand and in the water, but don’t forget to check out which festivals and celebrations are going on during your visit.


Things to do in Cadiz:

The largest and capital city of Portugal, and one of the oldest cities in the world, Lisbon is an idyllic cruise holiday destination, offering attractions to suit all interests. From ancient forts to artistic neighbourhoods and the breath-taking Jerónimos Monastery, this port of call has plenty to explore. Families will love to discover the many species at the Oceanarium, while couples will love an escape to the charming town of Sintra to explore the castle.


Things to do in Lisbon:

Home to the largest fishing fleet in Europe, you’ll find some of the best seafood you’ve ever tasted here in Vigo. With lush mountain landscapes providing the perfect backdrop, this city boasts a combination of ancient architecture, contemporary attractions and beautiful natural spaces to explore. Venture further afield to the Cíes Islands for some of the best white-sand beaches and scenic hiking in Spain.


Things to do in Vigo:

You will be at sea on day 7 while travelling from Vigo to Southampton.

You will be at sea on day 9-10 while travelling from Southampton to Kiel.

With state of the art port facilities, easy access to the city centre and varied attractions to suit cruisers of all ages, Kiel is a hidden gem in the Baltic sea. A good way to get your bearings of this port city is through a hop-on-hop-off bus tour, taking you to the top landmarks in comfort. To discover the history of Kiel, head to the Maritime Museum and the German Submarine U-995. For a laidback wander and good food, visit Kiellinie.

Cabins on the MSC Grandiosa