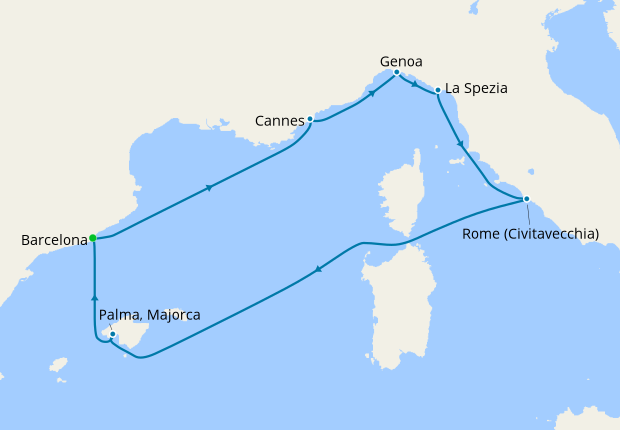 World famous for its annual film festival, Cannes will charm you with its picturesque streets and beautiful harbour full of yachts. Dating back to the 1st century BC when it was a quaint fishing village, Cannes is full of medieval monuments and architecture. Make sure you climb the tumbling alleys of Le Suchet up to see fantastic views of the city and Lerins Island, as well as explore Musée de la Castre and stroll la Croisette under the trees or the idyllic promenade.


Things to do in Cannes:

The historic city of Genoa has played a pivotal role in Italy’s past, particularly when it comes to maritime endeavours. One of the world’s biggest shipbuilding yards – Fincantieri – is located here, and Genoa is also hometown to the famous explorer, Christopher Columbus. You can easily imagine the hustling, bustling travellers and traders of years gone by as you wander in the Old Port, and relive history in Piazza de Ferrari, and the mansions of Via Garibaldi. Sip on delicious wine and enjoy the very best seafood dishes in this pretty yet industrial Italian city.


Things to do in Genoa:

La Spezia is the second largest municipality in Liguria after Genoa and is located a few tens of kilometres from the border with Tuscany. It overlooks the eponymous gulf, which is also known as the Gulf of Poets. In the city you can visit the Technical Naval Museum, the Church of Santa Maria Assunta, the Church of Nostra Signora della Neve, and the medieval Castle of San Giorgio. It is also an excellent starting point for discovering the island of Palmaria and the Cinque Terre.

You will be at sea on day 6 while travelling from Rome (Civitavecchia) to Palma, Majorca.

Cabins on the MSC Grandiosa