Sail Away with a little extra with Cunard -
Low 5% deposit PLUS Free Onboard spend when booking Cunard Fare on selected 2023 sailings!
Cruise + Flight

Save up to an extra £21 when booking this cruise online 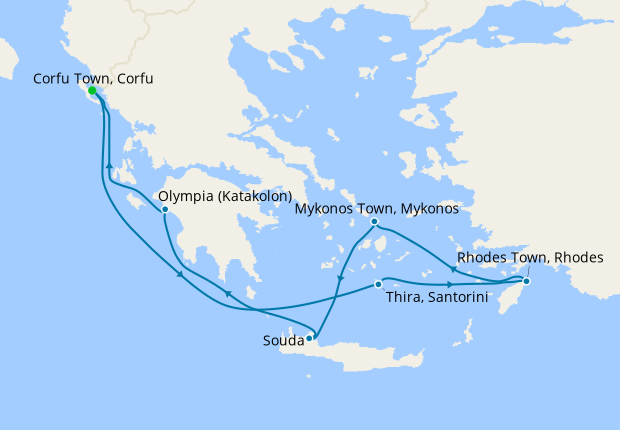 Cruises on Marella Explorer
Fly from the UK

You will be at sea on day 2 while travelling from Corfu Town, Corfu to Thira, Santorini.

The sleepy seaside village of Katakolon is perhaps one of the biggest tourist highlights of Greece, thanks to its close proximity to Ancient Olympia. With sparkling turquoise waters, numerous traditional tavernas and the warmth of a friendly, local community, Katakolon is the perfect place to explore on foot in the sunshine, where you’ll find museums, bars, restaurants and souvenir shops, as well as horse-drawn carriage rides and even a Beer Bike!


Things to do in Olympia (Katakolon):

The ship, the crew, the food and service were fabulous. However, the entertainment i.e. the evening show was pretty dire.

Good holiday, very relaxing. Booked more tours than usual because done this trip before and know the port areas.

Buffet restaurant food was very poor, lack of choice. The ship is run like a holiday camp, quite difficult to find some peace and quiet. TUI excursions are far too expensive, rip off. Entertainment amateurish.

* Please note - Itineraries calling into Venice and Dubrovnik will incur a small tourist tax per person, this will be added to your onboard account during the cruise.

Note: On 13 January 2018, new European legislation is being adopted in the UK which as result will mean that we may change our required method of payment at our discretion, irrespective of how any deposit or prior payment was made.
Speak to a Cruise expert 0203 848 3628