...... Plus much much more
All gratuities are also included in the price 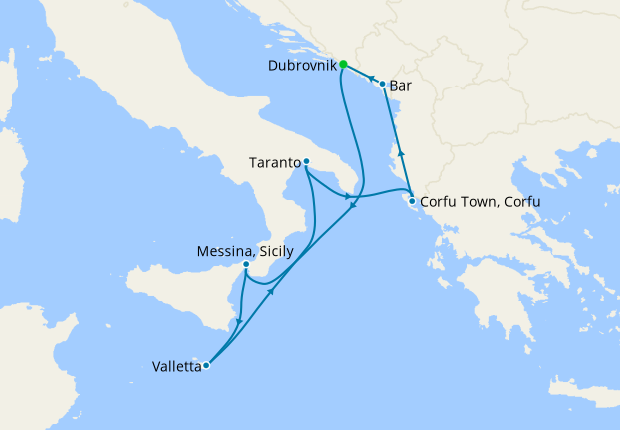 You will be at sea on day 2 while travelling from Dubrovnik to Messina, Sicily.

Cabins on the Marella Explorer 2

I’d like to Say a Big Thank you to Captain Kostas and his Crew and All the Amazing Staff and to all the Entertainers onboard Explorer 2 where we Spent Christmas & New Year. The Food was always well presented and Lovely. Can’t fault anything apart from Bringing us Back Lol. All Joking aside nothing was too much trouble for anyone on this Ship. Visiting the Beautiful Caribbean so what more could anyone what accept to go again Thank you so much

We really had a good holiday we loved the ship entertainment shows was good. apart from one singer from one of the bars on an evening he played a guitar and sung Irish songs and they were a bit depressing we weren’t the only ones it got on your nerves after a bit but we would rather listen to a band be able to get up and have a dance also they only brought one out side entertainer per week on P&O you have a couple of acts over two weeks staff we’re really friendly cabin was fine bath room could do with an up date

We have been on 8 cruises with various operators (princess, Royal Caribbean, Cunard, Holland America, P&O ), and not been with Marella before, but were recommended to do so by a friend who used to work in the industry. We were not disappointed: ship very clean and tidy, with a fresh contemporary feel and unfussy (no expensive artwork), nice furniture throughout; cabins immaculate, with a larger bathroom than most, notably with a glass shower screen, rather than a curtain. Crew welcoming, professional and always cheerful. Entertainment first rate, food standard excellent, (but with buffet selection smaller than some) and more than enough bars with a wide range of cocktails available; we had the premium drinks package for £7 a day, which was great value. Transport to and from the ship was extremely efficient; we were given cabin tags at the UK airport for the suitcase, Naples was not as chaotic as we feared (we travelled mid-week), with a 5 minute walk to the coaches. Luggage was loaded on to the coaches for us, and appeared at our cabins within an hour of boarding. Boarding efficient and quick, a couple of minor issues ( a twin room set up as a double) rapidly and efficiently sorted out. return journey equally good; luggage was left outside the cabins the night before leaving, the next time we saw it was on the baggage claim in the UK. Didn't use any of the ship's excursions, so can't comment on these. Excellent value for money with all tips and drinks included, we would definitely use Marella again.

Overated short measured on premium drinks package glasses not filled up properly always waited till you had a third left and topped up by a third not always convinced you got the drink from the premium package cabin steward great helpful and friendly Restaurant windows dirty so any pictures taken were blighted.

Did the Mediterranean Gems cruise from Naples in August. Had a great time, the ship was lovely and the staff were exceptional, very friendly and attentive. Our balcony cabin was great and very good value. All the ports of call were interesting and were very well organised. Our first Marella cruise and would certainly recommend to family and friends.

Staff and crew were very nice. Food was good and variable just what we wanted from a cruise ship holiday.

Can’t praise Iglu and Marella highly enough. From booking with Iglu to walking into our balcony cabin everything was perfect. There were plenty of Marella staff to welcome us at the airport and the organisation at port was excellent. The ship was recently refurbished and generally was good. The layout of The Market Place food was a bit random and had a quite limited selection but we always found something to eat. Lattitude 53 was excellent. All in all an excellent cruise which was marvellous value for money. Would definitely cruise with Marella again.

Marella Explorer 2 is a great entry level cruise option, fully inclusive so takes all the worries away. Good itinerary with public transport easily accessible so you can avoid the tours. Entertainment is varied enough though suited to the mass market ... particular mention of the Cruise Director who sang an amazing Sinatra esq set. If you want super posh this isn’t for you but if fun in the sun is your thing you cannot go wrong. Ideal for traveling with young adults (plenty of families) right up to those of retirement age but noticeably a slightly younger average than some cruise lines. Waist line hasn’t recovered yet from the good food - we stuck to the inclusive restaurants, so no need to upgrade.

Great cruise good value for money Food was good with a large choice. The Ship was very clean, staff very helpful I will definitely use- go again.

Excellent, service, food, transfers, ship, what more can I say.

Note: On 13 January 2018, new European legislation is being adopted in the UK which as result will mean that we may change our required method of payment at our discretion, irrespective of how any deposit or prior payment was made.
Speak to a Cruise expert 0203 848 3628
Close