Marella Discovery
...... Plus much much more
All gratuities are also included in the price
Show more 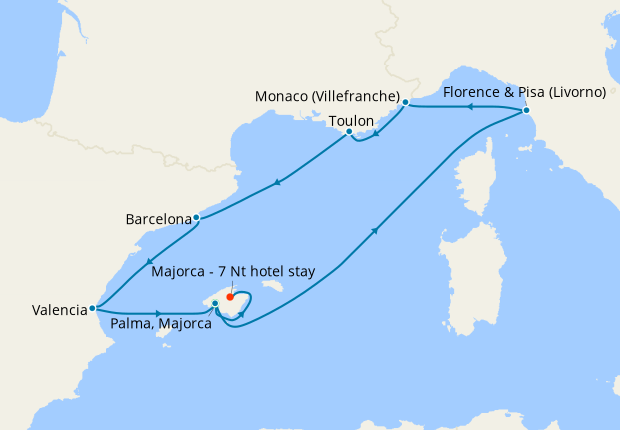 Cruises on Marella Discovery
Fly from the UK

You will be at sea on day 2 while travelling from Palma, Majorca to Florence & Pisa (Livorno).

Made famous by its sloping bell tower, Pisa was once a simple but noteworthy port town. Over the years Pisa had some involvement in Italy’s military conflicts, and has seen success in matters of trade. Today most visitors come to see the fascinating Leaning Tower; a construction dating back to the 12th century that has been repeatedly repaired and stabilised over the years. As well as this is the neighbouring cathedral and baptistery, and the pretty Square of Miracles which houses them all. Pisa has a brilliant culinary scene, with many inexpensive restaurants serving amazing antipasti, pizzas, pastas, and other hearty Italian dishes.


Things to do in Florence & Pisa (Livorno):

Toulon started as a small fishing town in antiquity to become France’s first naval port, and the largest city in the scenic Var region. It's famous for its natural beauty. Here you can enjoy the local ‘chichis’ (similar to Spanish churros) on the beach during a pleasant stroll to the sound of the waves and chirping crickets, and explore the old town’s medieval buildings and 900-year-old cathedral. For the best views, take the cable car up Mont Furon.


Things to do in Toulon:

After diverting its flood-prone river to the outskirts of the city and converting the remaining riverbed into a flourishing park, Valencia has quickly become a tourist hotspot in Spain. Ever the innovative, it combines traditional Spanish charm with futuristic buildings and districts, such as the City of the Arts and Sciences. Whether you’re here to immerse yourself in the culture or for the sun, sand and sea, you’ll love Valencia.


Things to do in Valencia:

It's a little dated and in need of a refurb but that is going to be done in ovember apparently. Had a relaxing cruise and enjoyed it thoroughly.

The 7 day cruise was fine. There were issues with the journey from Birmingham airport, a lack of clear information meant that we arrived to find that we needed a PCR test and by following all the information I was given, we hadn’t had one. It was the most stressful time of my life and we weren’t the only ones in this situation. The Tui staff suggested that we take a taxi to the bullring todo a hour turnaround PCR, of course it was closed at 7.30 on Easter Sunday. When we got back to the check in desk, it was suggested that we go to to Tenerife or go home and they would call us on Tuesday to arrange another holiday. This holiday was to celebrate our 40th wedding anniversary last month and it hadn’t been exactly been easy to take 2 weeks off work! To get on the flight we had to pay and take for a 4hour PCR test and book a hotel to stay at in Barbados for the night to fulfil Tuis stipulations! Once in Barbados, we were transferred to the ship with no issues. We were unable to make contact with the Tui rep when we’re at the coconut court hotel as we could not download the Tui app as we had booked the trip through you and not disrespect with Tui. We spoke to many other guest who had spent a lot less on their trip thAn we did

Altogether a very good trip thoroughly enjoyed by us both. However I am expecting a rebate of £120 for the upgrade to premier service which came as standard for the executive suit which we had.

Note: On 13 January 2018, new European legislation is being adopted in the UK which as result will mean that we may change our required method of payment at our discretion, irrespective of how any deposit or prior payment was made.
Speak to a Cruise expert 0203 848 3628