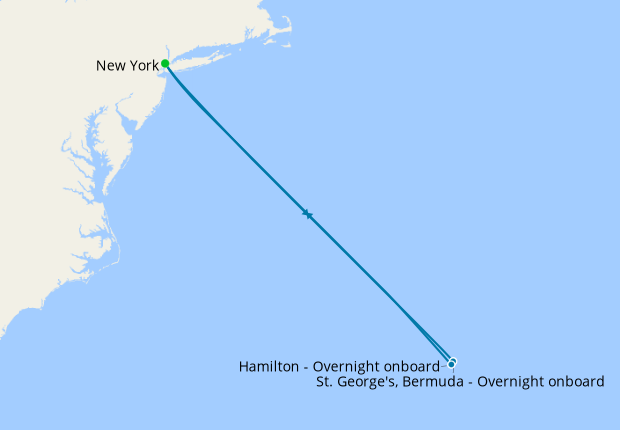 Cruises on Insignia Insignia images
Fly from the UK

You will be at sea on day 3 while travelling from New York to St. George's, Bermuda - Overnight onboard.

Bermuda and its capital of Hamilton offer pristine sandy beaches and crystal blue waters like popular beach day destinations of Elbow Beach and Horseshoe Bay. As an overseas British territory, a major draw is the Grand Naval Dockyard area where you can discover the colonial history of the island at the maritime history museum, along with modern-day tourist attractions such as Dolphin Quest, shopping, restaurants and bars.


Things to do in St. George's, Bermuda - Overnight onboard:

You will be at sea on day 8 while travelling from Hamilton - Overnight onboard to New York.

Cabins on the Insignia

It was a really good cruise despite some strong winds. The food has to be amongst the best that I have had on a cruise ship. The staff were as usual very attentive and looked after us very well. The decor was excellent and the ship had only completed a refurbishment 2 weeks before. Fantastic. The entertainment was not up to standard; one of the speakers was poor and the other's subject matter was not of much interest. There needed to be more speakers particularly as we had 6 sea days. The guest entertainers lacked variety. The 2 who joined the ship half way through, one was a ventriloquist and the other a magician and OK for one performance but not 2.

End of October is not a time to do a fall cruise. 4 out of the 8 stops were cancelled due to various weather conditions and whilst this is not the cruise lines fault their response is. The line provided free drinks for 2 evenings to compensate passengers, as I had bought a premium drinks package this was of no benefit to me. When I asked at reception how I was to be compensated I was told " it was the luck of the draw" and I was not to receive anything! In relation to the cruise itself I found the selection of tours disappointing. The entertainment was acceptable and much better than 5 years ago when I last used oceania ( although this is not a high bar). Food is good and service is like most cruises, good in parts. Outside of the cruise you had provided accommodation and transfers all of which worked well except for the transfer from hotel in new York to cruise terminal. We had to wait one and a half hours make 4 phone calls and listen to excuse after excuse - very poor

Ship in need of refurb . Variety of food and d rink very good but always Luke warm not hot. Entertainment mediocre.pool not a swimming pool a plunge pool . Ship very clean staff excellent in every way . The hotel on day and night prior to cruise although central for everything was poor .Room very small difficult for my husband who is severely sight impaired it was on the 15 th floor lifts worked intermittently.Breakfast included had very little variety. The tours off ship - 3were cancelled we were given option of other tours or money back to on board spend only .Some of the option tour were good some were not so good. When disembarking as we got though customs it was absolute chaos nobody there to tell us were to go to get taxis or go on tour as flight late evening .

Concierge balcony cabin was in poor condition, did not appear to be any benefits of concierge on this 10 day cruise. The panels on the balcony dividers had paint peeling off and the sliding balcony door black dirt and rust.The food was good, but not as claimed by Oceania to be exceptional. The service of the staff was very good, plenty of them and they were attentive. Entertainment was poor, just like a lot of small cruise ships, six singers and dancers, we did not think we're very good. We have cruised seventy times with several different cruise companies,this cruise line we would not use again.

The cabin was overdue a refurbishment. The furniture was warn and there was paint peeling off the balcony divider. The balcony door was surrounded by black rust. The service was good, the food was good but no more than that, it certainly didn't live up to pre cruise adverts of best food at sea. As far as value for money is concerned this was poor value. The ship's entertainment was poor, very little going on during the day. The change in itinerary due to Hurricane Florence, which was perfectly understandable, meant that we spent two days in Portland, Maine. There wasn't much to do there, it was a poor substitute for Bermuda. Having cruised roughly 70 times, we would not choose Oceania again.

You will know we have travel via yourselves many times. We enjoy quality but value and you predominantly hit this brief HOWEVER arranging a Thomas Cook Air tanker after we paid and got a 5 star cruise seriously affected our holidays. The plane had extremely poor services and facilities and was a huge disappointment. Prior to going I would of complained about the extra charges incurred regards compulsory charges for the hotel which we had not been informed of until literally the last minute BUT we ignored it because overall your holidays have worked out really fine. The Air tank you arranged for us despite others who used Iglue for the same cruise and same airport was such as Virgin. I am unhappily bemused that your organisation thought after a quality holiday we would want to come home in an excuse of 21st century travel. VERY DISAPOINTED.

*Weekend Balcony Flash Sale: Booking window between 16-20 October 2021; savings depend on category and must meet minimum booking value requirements - Balcony categories will include extra £25 per person savings with minimum booking value of £899 per person; Suite bookings will include extra £50 per person savings with minimum booking value of £999 per person; Savings apply to guest 1 & 2 in a stateroom only. **LOW DEPOSIT applies to new bookings only and is valid until 31st October 2021; this offer is not valid on Around The World Cruises and segments. This offer is subject to availability and may be withdrawn at any time without prior notice. Not all promotions are combinable. The per person, per cruise deposit required to secure your reservation, is a low deposit of 10% of the applicable cruise fare within 7 days of booking. Bookings made between 91 and 120 days of sailing are required to deposit within 3 days of booking and bookings made within 90 days of sailing are required to deposit by the end of the booking day. Bookings not deposited as per this schedule will automatically be cancelled. Unless otherwise noted, final payment must be received by Oceania Cruises 91 days prior to cruise departures for voyages of less than 15 days and 151 days prior for voyages 15 days or longer, together with passport details and any special onboard service requests; otherwise, bookings may be subject to immediate cancellation and any applicable cancellation charges. You must pay for your arrangements in the currency chosen at the time of booking. *O LIFE CHOICE - The beverage Package amenity is House Select (which consists of beer, wine & champagne served with meals) and is one per full-fare paying adult of 21 years of age or older with a maximum of two per stateroom. The Shipboard Credit Amenity is up to $800 onboard credit per stateroom determined by length of Cruise: up to 9 Nights - $400 per stateroom, 10-13 Nights - $600 per stateroom & 14+ Nights - $800 per stateroom. This is based on double occupancy and is subject to change. The Excursions Amenity is determined by length of Cruise: Up to 9 Nights - 4 excursions per stateroom, 10-13 Nights - 6 excursions per stateroom & 14 Nights+ - 8 excursions per stateroom. Free Shore Excursions vary by voyage and exclude Oceania Select, Oceania Exclusive, Executive Collection, Food & Wine Trails, Wellness Discovery Tours by Aquamar, Go Local, and Culinary Discovery Tours. If shore excursion amenity is selected, all excursions must be chosen at least 14 days prior to sailing. Guests in the same stateroom must choose the same OLife Choice amenity. Free Internet is one per stateroom; Owner’s, Vista & Oceania Suites receive access for two devices per suite. Free Internet usage is subject to time and data limitations; Internet usage fees may apply. Suite and stateroom measurements are approximate, and those in the same category may vary in size. Suites and staterooms may also have different furniture placement than depicted in the photographs. The airfare programme is limited to flights originating or terminating in London, regional connections are available at additional cost. For select sailings, a pre-cruise hotel may be required, depending on flight allocation. If so, this will be available as an additional supplement.

Note: On 13 January 2018, new European legislation is being adopted in the UK which as result will mean that we may change our required method of payment at our discretion, irrespective of how any deposit or prior payment was made.
Speak to a Cruise expert 0203 848 3639
Close