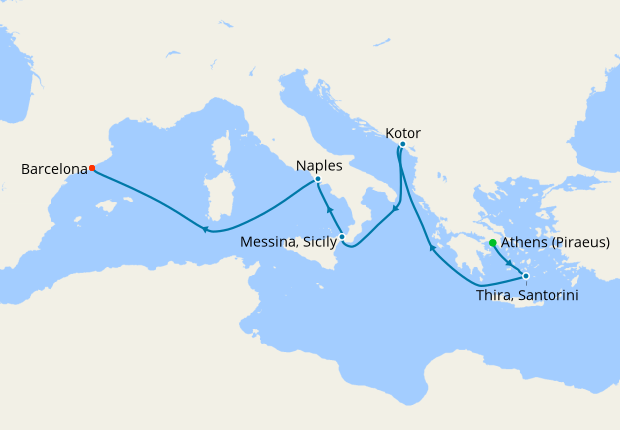 Cruises on Enchanted Princess
Fly from the UK

You will be at sea on day 3 while travelling from Thira, Santorini to Kotor.

You will be at sea on day 7 while travelling from Naples to Barcelona.

Cabins on the Enchanted Princess

"Princess Plus includes Premier Beverage Package, WiFi & Gratuities and is available on cruises longer than 3 nights in duration. Princess Plus is an additional £30 per person, per day, for all passengers. The total equivalent value for pre-paying or purchasing on board for the elements included in the Princess Plus package is $95.28 per person, per day. Princess Plus can be removed at any time. Offers can change or be withdrawn without notice. ***Premier Beverage Package*** The Premier Coffee & Soda Package applies to all guests in a stateroom that are not eligible for the Premier Beverage Package due to age restrictions. The same terms and conditions for usage of the premier beverage package apply. In the event that a guest does not want the Premier Coffee & Soda Package, no substitutions will be offered. ***Wi-Fi*** Offer applies to all guests in stateroom (one device per guest). ***Gratuities*** Discretionary stateroom gratuities to the value of $14.50 per person per day for Interior, Oceanview, and Balcony staterooms, $15.50 per person per day for Mini-suite and Club Class staterooms and $16.50 per person per day for Suites. Does not include gratuities added to bar charges, dining room wine accounts or Lotus Spa services. An additional service charge will be applied to all drinks purchased from the bars and restaurants. This is including any drink part of the Princess Plus inclusions. Gratuities are not transferable, non-refundable and have no cash value.

Note: On 13 January 2018, new European legislation is being adopted in the UK which as result will mean that we may change our required method of payment at our discretion, irrespective of how any deposit or prior payment was made.
Speak to a Cruise expert 0203 848 3615
Close