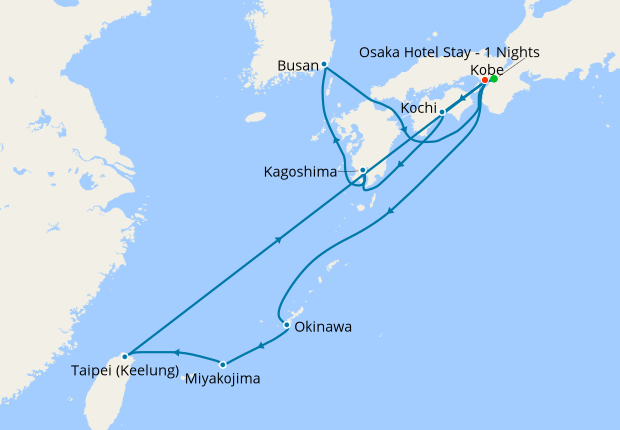 Cabins on the Diamond Princess

We have just returned from Japan and South Korea. Iglu arranged everything for us , Hotels, transfers, cruise ,and flights. It transpired whilst away that or return flight was the wrong day, we contacted iglu and they sorted everything out for us without delay. Could not have had better service.

Was disappointed didn't get free upgrade for stateroom. Food particularly in the buffet restaurant Horizon Court very good.Huge choice. Was able to take part in some activities. Not enough time to try all. Expensive internet on board could not always get free on shore! While disembarkation was well organised, we were bussed to Narita airport 5/6 hours before could check in. Sorry not a fan of airport shopping and wait was frustrating!

After spending a most enjoyable 4 days in Tokyo, We took a 9 day cruise around Japan. The itinerary was good and the shore excursions interesting. For those who did not want to join the ship's own excursions, there was a shuttle from the ship into the local town. The cost varied from 10 US dollars to 20 dollars depending on the distance involved. We think this service should have been free. The Diamond Princess was an excellent ship - one of the best we have sailed on. The ship itself was well-designed in terms of layout and the very large TV screen on deck 14 was good for relaxing and watching a film etc. There were so many things happening onboard during the day, it was hard to decide which one to attend. The staff were all very attentive and there was no pressure to purchase things, particularly drinks, which has not been the case on other cruises we have been on. The trip was organised by IGLU and every aspect of it worked as planned. So all in all a very enjoyable holiday. In fact we are off with IGLU in December to the Antarctic.

"Princess Best Value includes Premium Beverage Package, WiFi & Gratuities and is available on cruises between 3 and 32 nights in duration. Princess Best Value is an additional £35 per person, per day, for all passengers. The total equivalent value for pre-paying or purchasing on board for the elements included in the Princess Best Value package is $95.28 per person, per day. Princess Best Value will not be available to purchase on cruises within 90 days of sailing and can be removed at any time. Offers can change or be withdrawn without notice. ***Premier Beverage Package*** The Premier Coffee & Soda Package applies to all guests in a stateroom that are not eligible for the Premier Beverage Package due to age restrictions. The same terms and conditions for usage of the premier beverage package apply. In the event that a guest does not want the Premier Coffee & Soda Package, no substitutions will be offered. ***Wi-Fi*** Offer applies to all guests in stateroom (one device per guest). ***Gratuities*** Discretionary stateroom gratuities to the value of $14.50 per person per day for Interior, Oceanview, and Balcony staterooms, $15.50 per person per day for Mini-suite and Club Class staterooms and $16.50 per person per day for Suites. Does not include gratuities added to bar charges, dining room wine accounts or Lotus Spa services. Gratuities are not transferable, non-refundable and have no cash value.