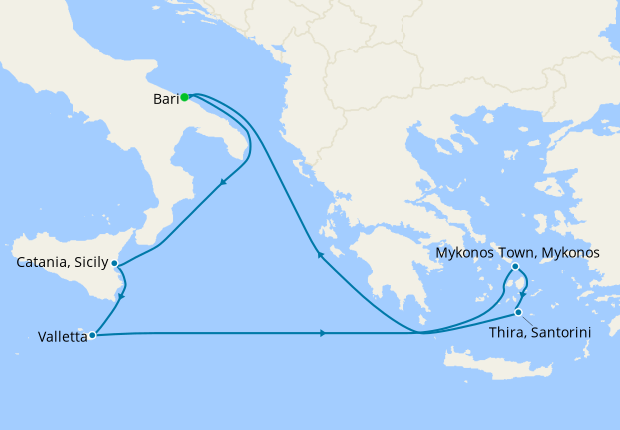 Found on the southeast edge of Italy, Bari has long been a large and bustling port town which boasts some fascinating history. There are plenty of religious buildings to see which house the relics of various saints – including those of St Nicholas (Santa Claus), and Saint Columba of Ireland. It’s also worth exploring the Old Town and Piazza Mercantile, to get a flavour of traditional Bari life complete with fresh Italian cooking, children playing football, and of course plenty of wine. In the piazza is also the ‘colonna infame’, which dates back to the first century AD. It’s here where criminals were held in years gone by to be ridiculed and punished.


Things to do in Bari:

Catania is located on the eastern side of Sicily on the slopes of Mount Etna, the highest active volcano in Europe. It was founded between 729 and 728 BC by the Greeks of Chalcis and, like the other major Sicilian cities, it was subjected to the domination of different populations because of its strategic position on the sea. Among the places of artistic and cultural interest are the Ursino Castle, the Sant’Agata Cathedral, and the Benedictine Monastery.


Things to do in Catania, Sicily:

You will be at sea on day 4 while travelling from Valletta to Mykonos Town, Mykonos.

You will be at sea on day 7 while travelling from Thira, Santorini to Bari.

Found on the southeast edge of Italy, Bari has long been a large and bustling port town which boasts some fascinating history. There are plenty of religious buildings to see which house the relics of various saints – including those of St Nicholas (Santa Claus), and Saint Columba of Ireland. It’s also worth exploring the Old Town and Piazza Mercantile, to get a flavour of traditional Bari life complete with fresh Italian cooking, children playing football, and of course plenty of wine. In the piazza is also the ‘colonna infame’, which dates back to the first century AD. It’s here where criminals were held in years gone by to be ridiculed and punished.


Things to do in Bari:

Cabins on the Costa Pacifica

I have been on p&o, celebrity, Thompson, this is the worst cruise I've been on the food was terrible as was the entertainment the organisation to got off on shore days was a shambles we had to que for over two hours for a tender in the heat when you go to customer relations to complain they tell you to email when you get home I would not go on a costa cruise if it was free

Good Things: Check in was easy. Check out easy. Variety of music excellent. Waiter service excellent. Boat architecture good, especially the lifts in the central hall atrium. Some evening entertainment good, but not all (see below). Good spa facilities. Generally a cheerful atmosphere on board. Poor Aspects: No movie theatre in afternoons. Only two lectures in English for whole of cruise. No Captain's Reception. Only two "Formal" nights in eleven. Many did not have proper dress. Very poor layout of restaurants My Way and New York New York. Some seats much better than others. Too many rectangular, not enough circular. Lower seating area could not enjoy excellent waiter dancing etc. No wine waiter to order proper drinks. We had to go to bar to get proper Proseco. Food varied from very good to almost inedible. Menu should be posted outside restaurant entrance. No viable alternative to main restaurants. Silly high price for WiFi. Make it free. Breakfast should be available until 11 or 12.00. Rush to make 10 at times. Cabin lights not bright enough for reading in bed. Some evening shows very good but some grim (clown). Lead singers male and female not all that good. Afternoon cake and tea gives impression of budgeting (little choice, not appetising). Charging 5 euros for breakfast in bed is silly and just causes resentment. No "Sailaway Parties" on deck. Hope the above helps in your future planning.

We have never travelled with Costa but always wanted to visit Rio. We have been on several different ships so yes you do compare, so compared to other ships and service we found this terrible. Yes the ship was beautiful but there is more to a ship than beauty. The food was bland, same old thing everyday and the entertainment for your main show after dinner was some what lacking other ships. There was a massive language barrier as the majority on the ship were Italian and Spanish and to be honest we did not feel as though we were made welcome at all on the ship. Lots of things went wrong and thank god Iglu Cruises sorted it out as we were at the other side of the world. So a holiday in which we wanted to go and see was a nightmare and the biggest majority was down to Costa Cruises.

My family and I (two young children) have cruised mainly with RCCI and P&O but thought we would give Costa a try. We have recently come back from Eastern Med cruise to Greece, Turkey and Cyprus (changed itinerary as we could not go to Israel and Egypt). We had an amazing experience, despite some of the negative reviews about smoking (we are fussy and do not like being around smoke), but we had no problems whatsoever. The childrens' club was outstanding, and I have never seen a team of staff work so hard with the 400+ young children from 9am through to 11pm. Such dedication too, despite the 40 different nationalities. My children thought it was amazing to be able to learn Italian, Spanish, French, German as well as hear their own language being used. They rate Costa childrens clubs higher than RCCI and P&O, and they love RCCI clubs. Food was fantastic, and the Spa was the best I have ever seen, including better than Independence of the Seas, though the gym was much smaller and always busy. Staff throughout the ship were attentive, courteous and very helpful (I am fussy about customer service) and I have no complaints. The entertainment in the theatre was second to none - first class (again, something I am fussy about). The overall appearance of the ship was spotless, and the ship theme 'music' was a real treat with musical instruments all over the ship and different music being used in different areas of the ship. We purchased a samsara dream package which allowed us to the speciality samsara restaurant, for healthy eating choices and more refined dining, and my children enjoyed that too, as well as being able to have unlimited access to the Spa facilities - outstanding! I highly recomnmend everyone trying Costa, the whole experience, including interconnecting flights from London to Rome via Milan, and then the transfers to the ship, were seamless and very high quality. Well done Costa - now looking to book again with them for the summer 2011 and beyond.

This is the 2nd cruise I have been on with Costa and the first on this ship. The ship is big but follows the plan of all there ships, so once I realised that I found it easy to get around. The decor is breathtaking. The crew were outstandingly friendly and nothing was too much trouble.

Note: On 13 January 2018, new European legislation is being adopted in the UK which as result will mean that we may change our required method of payment at our discretion, irrespective of how any deposit or prior payment was made.
Speak to a Cruise expert 0203 848 3627
Close