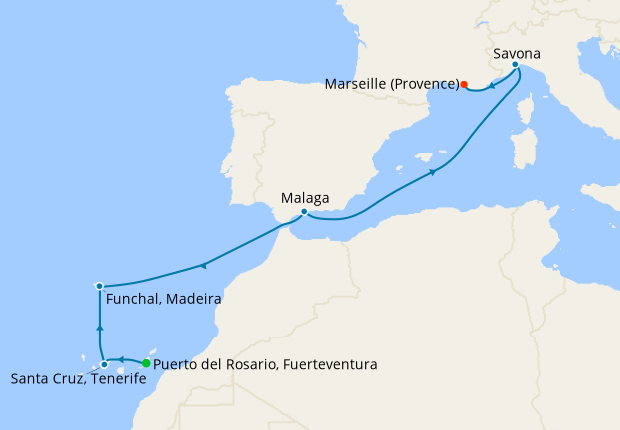 The ‘floating city’ of Venice has romantic connotations all over the world. Known for picturesque canals, colourful buildings, gentle gondola rides, good food, and an ample supply of history, this is one Italian destination that sits on many a bucket list. See magnificent architecture in St Mark’s Square, the fascinating Doge’s Palace, St Mark’s Basilica, and the famous Bridge of Sighs. After soaking in centuries of history, be sure to make time to simply watch the world go by with a world-class cup of coffee and a piece of tiramisu, or indeed an indulgent glass of wine and pasta dish.


Things to do in Venice:

The island of Kefalonia has flourished after falling victim to a devastating earthquake in 1953, where almost every structure was demolished. Now, Argostoli is a thriving port city with shopping, restaurants, an active harbour and warm, friendly locals. You’ll find no shortage of traditional seafood, a quaint church, and a Blue Flag-awarded sandy beach. If you’re looking for a laid-back cruise holiday with plenty of sun, Argostoli is the place for you.


Things to do in Argostoli, Kefalonia:

One of Greece’s most verdant islands and perfect for a family holiday with charming architecture, an impressive fort and a 16th century church, Agios Spyridhon. Mount Pantokrantor rears up in the north of the island and all around the edges are sandy beaches and small villages. Whether you’re here to top up a tan on the stunning Loggas Beach or eager to discover the gorgeous monuments, Corfu has something for everyone.


Things to do in Corfu:

Cabins on the Costa Luminosa

we had a great time on our cruise only one tour on thursday29 th we went on BUDVA AND KOTOR WE COULD NOT HEAR OUR GUIDE AND WHEN WE CAME OFF COACH WE COULD NOT KEEP UP WITH HER .WE GOT BACK NEAR SHIP AND SHE WAS GOING TO KOTOR WE LEFT TOUR AND WENT BACK ON BOARD SHIP WE REPORTED THIS ON BOARD

Enjoyed the cruise, everything very organised, cabins clean, ship clean, food excellent. Our only complaint was there was not enough bar staff on duty at peak times (when excursions were coming back) it took 1/2 hour to get a drink most days, queing 4 deep at the bar. We had paid for the drinks package but then could not get served with the drinks.

Would definitely go on another Costa cruise. Everything was perfect and the staff on board were lovely and helpful. The ship was very clean and we had an amazing time. We were well looked after throughout the holiday.

First ever cruise and it was absolutely fantastic. The food in the a-la-carte restaurant was better than excellent and the choice was amazing everyday. My wife requires a Gluten Free Diet and they cater for that brilliantly. She received a great variety of meals at the same great quality as the non-allergy restricted passengers enjoyed. To compliment this were the staff. They are so passionate about making your experience a wonderful one, nothing is ever too much trouble and it is always done with happiness in their voice. I would struggle to decide which is best, the food or the staff. We were waitered on by 3 lovely gentlemen in the morning and at lunchtime and then by Melanie Marquez on an evening. The were all excellent! Our cabin steward was great too and was very creative with his towel sculptures. The ship itself is wonderful and huge. The spec is high and spread over 12 floors, there is so much to do. 'You can never stop' or 'just chill', the option is yours. If I had any criticisms, it would be the holidaymakers who stay in the jacuzzi's for literally hours or it seemed like that and some bad behaved kids in the outside pool area. This is not a criticism of Costa but just the lack of fairness and ignorance of some people out there. On the day at sea day, we did see two pool attendants and a security guard which sorted the pool problem but not the jacuzzi. Perhaps a time limit system would help to make sure everyone gets a fair turn of all of the facilities, if that was possible. The only other issue was the cost of the excursions, thankfully we didn't go on one as you can source cheaper when you get off the boat, but that's the same with every holiday company I've dealt with, so not a problem to us. Other than that, the cleanliness was first class, the room size in the Premium Balcony Cabin was more than adequate, the entertainment was very good and I genuinely can't see my wife and I getting a better experience in the future. Thanks Costa for a superb holiday! With regards to Iglu, everything was organised well, the information was emailed at the appropriate times and as long as the price is competitive, I would happily use your services again.

Sorry but was very disappointed with the cruise. The food was awful. Cold. No variety. The cabin ok but found the staff most of them unapproachable.nit your fault but out of 2500 people only 20 English. Found the other cruisers were very hard to get on with probably the language but was a bit intimidated by them. Am an outgoing person myself but just gave up after a couple of days. The ship quite clean but never had a change of sheets the whole 7 days. As for the drinks package found the quality of drinks that were available quite inappropriate for what we had paid..there was nowhere to bat any food after 9 o’clock in the evening ONLY if it was paid for. Sorry but will not recommend Costa Cruises to my friends As for the hotel provided in Venice that also was on a very low standard the beds were disgusting and the room was like a warren hutch. Think you should have a rethink about the accommodations there. Sorry have been on many cruise ship and think this one very uninteresting.

What has happened Costa ?we have just returned from 16 night repositioning cruise the food was terrible, service poor and public areas not very clean. There were quite a few English speakers on board but no English news channels or activities. By general census Costa have lost a lot of future customers from this cruise, even past Costa fans said "never again "

Note: On 13 January 2018, new European legislation is being adopted in the UK which as result will mean that we may change our required method of payment at our discretion, irrespective of how any deposit or prior payment was made.
Speak to a Cruise expert 0203 848 3627
Close