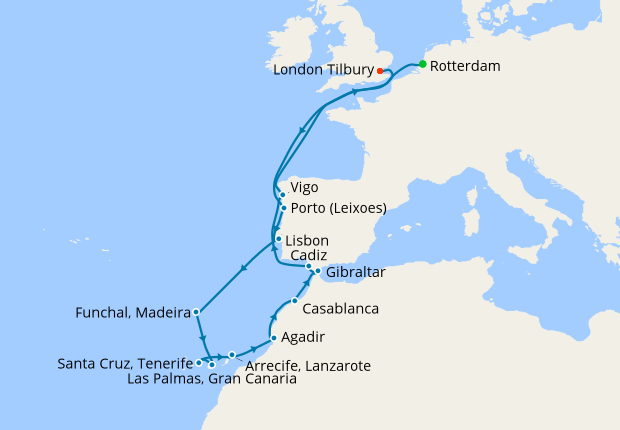 Cabins on the Columbus

This was our first cruise to celebrate our 50th wedding anniversary. What a wonderful ship nothing was to much trouble for the crew they were all brilliant. My husband is a chef and he said the food was beautiful. The captain is such a nice guy he has time for everyone of his passengers, if you guys are thinking of a cruise the COLUMBUS is the one. I can’t wait for my next cruise, I will become a cruise aholic for sure . I just love this ship, it’s just the right size to enjoy . I must stop as I will just keep talking about her. Thank you Tony fo my superb present, I adored it and need another one soon it must be the same ship .

This was our first cruise, and I can honesty say that we should of done this years ago. The itinerary was changed as the weather was bad in Oslo so the ship arrived in Tilbury later than planned. But it didn't stop them from getting us on board quickly. We had a lovely clean cabin, and our steward Edi was very helpful, even making two swans from towels on our window sill. In all the staff were fantastic, they were very courteous and polite and nothing was to much trouble for them. The food was fantastic and plenty of it, tea was sandwiches, cake and more cake!! Dinner was six courses. The diet went out the window. Cannot wait to book another cruise with them. x

could not fault anything onboard, but our itinery changed because of a delay and we didnt see any fjords as we arrived and left destinations in the dark. most upset because this was our main reason for going!!!

Cruise & Maritime Voyages Save up to 30% Buy 1 Get 1 Half Price promotion commences 2 January 2010 ending 31st March 2010. Savings and all discounts are included in the per person price shown. Offer is subject to availbility and may be withdrawn without notice. Your holiday is being booked on a ‘Low Deposit’ deal. The payment you will make today is lower than the usual and standard deposit. The remainder of the deposit will be processed automatically on or around the ‘due by’ date shown by using the same card as your initial payment. Should you cancel your holiday prior the payment of the balance of the deposit, you remain liable for this sum and any appropriate cancellation charges as per our agency conditions. These will be taken from your card upon your instruction to cancel.

Note: On 13 January 2018, new European legislation is being adopted in the UK which as result will mean that we may change our required method of payment at our discretion, irrespective of how any deposit or prior payment was made.
Speak to a Cruise expert 02038483604
Close
﻿