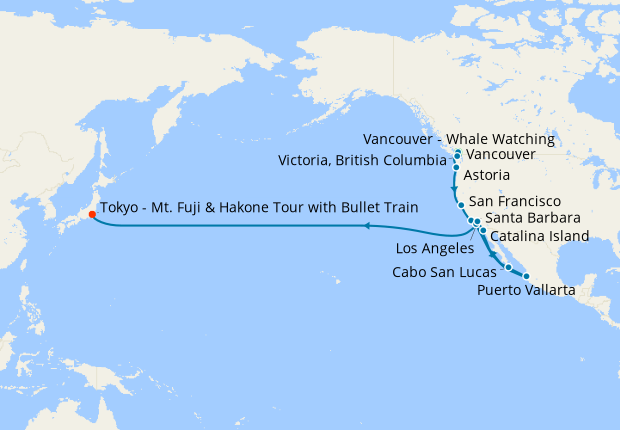 You will be at sea on day 4 while travelling from Vancouver to Sitka.

Formerly Novo-Arkhangelsk, Sitka has a more a Russian feel than other Alaskan towns with orthodox style buildings and churches. In fact, this was the location where Russia officially sold ‘Russian America’ to the US in 1867 to become what is now the state of Alaska. Sitka also has a deep affinity with the native Tlingit population and preserving culture, nature and history with the Sitka National Historical Park as well as bear and bird sanctuaries.


Things to do in Sitka:

You will be at sea on day 6-9 while travelling from Sitka to Sapporo.

You will be at sea on day 9 while travelling from Sitka to Sapporo.

You will be at sea on day 10-13 while travelling from Sitka to Sapporo.

You will be at sea on day 16 while travelling from Hakodate to Tokyo / Yokohama, Kanagawa - Overnight onboard.

Cabins on the Celebrity Solstice

Went on this fabulous cruise to New Zealand and Australia with my husband and friends as a celebration for my retirement, 60th birthday and Ruby wedding anniversary. As ever, with Celebrity, the staff went out of their way to make sure we were happy. The food was great and the buffet always had a huge and varied selection on offer. The entertainment was excellent both in the theatre and around the ship. Ports of call were all fabulous and our excellent captain ensured we were able to visit each scheduled stop. Celebrity is my favourite cruise line and this was no disappointment We have booked with Iglu cruises on several occasions and they have always been helpful do efficient. On this occasion we added a number of additional destinations at the start and end of the cruise. Our Iglu advisors were able to book excellent hotels and organise our flights and transfers for us. All these worked out fantastically. However, whilst trying to communicate with Iglu to organise our flights I found them difficult to contact. I could not get through on the phone for a number of days as they had an answer phone message saying they could not take calls as they were extremely busy. I was concerned, even checked to see if they had gone out of business. Once we were able to get through again on the phone our advisor ensured the whole package was put together and our holiday of a lifetime was brilliant.

Very good holiday overall, hotels at Auckland & Sydney could have been better but in truth for all the time spent in them, they were adequate. Embarkation at Auckland was easy, the best we’ve had. Solstice is showing a few understandable signs of her age but overall is excellent. Celebrity do the whole cruise experience pretty well. Definitely a cruise to do, saw lots & met lots of different & interesting folks.

Overall it was excellent. BUT It was not pleasant being hassled immediately on boarding to upgrade meals, buy drink packages etc. This was annoying particularly after undergoing the stressful checking in/security procedure.

Sailed from Perth to Auckland - a wonderful cruise. Sailing into Sydney was something to tick off the bucket list, and even the low cloud and mist didn’t spoil it. The ports were, with only one exception, Esperance, really good. Enetertainment was of a high standard, especially the Production crew and the Solstice orchestra, with the added bonus of an outstanding Cruise Director, who kept us all entertained. The Entertainments team, William and Jenna, were also brilliant. Food was good, and, in Murano’s, exceptionally good. The Solstice is a lovely ship, well kept and clean. Our stateroom was looked after really well by our steward, Antonio. Staff are lovely, and seem to really want you to have a good time. We had booked a few tours through Celebrity, and although possibly a bit pricey, were extremely well organised. We had a great time, on board the beautiful Celebrity Solstice.

23 March 2019 returned from New Zealand starting our cruise from Perth. Our ship celebrity solstice cabin 1211 our cabin steward looked after very well. Everything we asked him for was given. We chose concierge class and enjoyed the few benefits. The cabin interior looked dated and was in need of modernising. Food was fantastic, entertainment good. Thank you Lewis and all your team for keeping us entertained. Good job. Our only niggles were the pricey drinks package and daily $15 per person gratuity charges for 16 nights.

Good food, plenty of variety and excellent service. Very clean public areas especially the toilets. Plenty of bars and relaxation areas, even on sea days there were plenty of places to sit. On the negative side the entertainment wasn't up to the usual standard with shows being of a more amateur quality. Our balcony cabin was quite worn and furnishings being quite 'tatty', the bedding and towels were very worn and the bath robe was awful. Although we had prepaid gratuities, apparently this only applied to our drinks package and we were made to pay an unexpected bill at the end of our cruise. Apart from these gripes, the ports and cruise in general were very good, especially the staff. We've booked another cruise with celebrity next year .

My wife and I have just returned from Australian/New Zealand cruise. We traveled on the Solstice. This was a great experience The ship and crew where first class Food was also first class. We where in cabin 7200 This was looked after by cabin steward Anselmo and Assist cabin steward Arfa. First class service from both Meals where taken in the main restaurant on table 214 The waiter for this was Savio and Assit waiter was Yucel. Again first class service from both nothing was to much trouble for them this made our meals and evening a great dining experience. Also wine waiter Yesi gave great service I would rate all staff 10 out of 10

Had a good time cruising round Australia for the first time from Perth to Sydney visited some great places. Brisbane rained constantly! We loved meeting people, taking part in the quizzes and the food. There was little entertainment such as the shows were boring, films were on too late, port talks were boring and tours weren't interesting. We were going back to the ship from Bali they were helping people out of the tender, they helped a woman out and the waves rocked the tender, the woman almost fell out the sailors just about grabbed her but it should of been reported. David, Wigan.

We have just returned from the Austraila/NewZealand cruise.The ship looked so impressive and spectacular waiting for us in Sydney harbour right next to the bridge and Opera House. Ship is spotless, so much so that the constant cleaning and hoovering began to get on our nerves as the hoover wires became a hazard when walking about. There are no kettles or facilities to make a drink in your cabin, but a kettle was delivered when we asked for one.Staff are very friendly and helpful, although the young girls making the toast in the morning were not as polite or friendly. They also had no idea how to make toast! The drinks packages are expensive and someone was always trying to sell you something which became annoying. These are just some of the little things that may be of interest to you. On the whole it was a fantastic cruise and would recommend it. Going through Milford sound is absolutely amazing and spectacular.

In May 2012 I was lucky enough to go on the Celebrity Solstice. Having been on quiet a lot of cruises, this was by far one of the most enjoyable. The service was amazing and staff were fantastic, nothing was to much trouble, and the food was 5 star. I would not hesitate booking to go on this ship, or any of the Celebrity ships, for my next holiday.