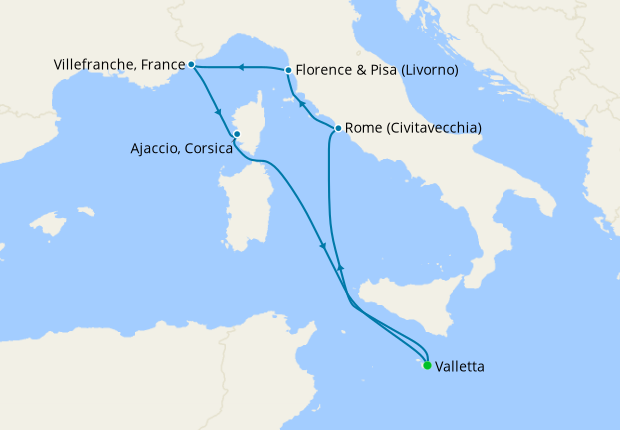 You will be at sea on day 2 while travelling from Valletta to Rome (Civitavecchia).

Made famous by its sloping bell tower, Pisa was once a simple but noteworthy port town. Over the years Pisa had some involvement in Italy’s military conflicts, and has seen success in matters of trade. Today most visitors come to see the fascinating Leaning Tower; a construction dating back to the 12th century that has been repeatedly repaired and stabilised over the years. As well as this is the neighbouring cathedral and baptistery, and the pretty Square of Miracles which houses them all. Pisa has a brilliant culinary scene, with many inexpensive restaurants serving amazing antipasti, pizzas, pastas, and other hearty Italian dishes.


Things to do in Florence & Pisa (Livorno):

A popular holiday resort with people from all over Europe since the 19th century, Nice is one of the top spots on the beautiful French Riviera. A stroll down the Promenade des Anglais is a great way to admire the scenery and pebbled beach before heading to the pleasant harbour - a fantastic spot to enjoy some seafood in the sun. After dining, head up to the gorgeous gardens atop the old castle for unrivalled views out over the whole city and bay.


Things to do in Villefranche, France:

As the birthplace of Napoleon Bonaparte, Ajaccio and its museums and monuments is a must visit for history enthusiasts. During the day you’ll find beachgoers enjoying the sun and sea and locals relaxing in one of the many café’s while, after dark, the city is alive with thriving nightlife. Whether you’re here to relax or play, Ajaccio’s historic, pastel-coloured lanes and buildings will provide the perfect setting to a cruise holiday.


Things to do in Ajaccio, Corsica:

You will be at sea on day 7 while travelling from Ajaccio, Corsica to Valletta.

We went for new year on Azura from Barbados, first cruise and won’t be my last, absolutely fantastic. The food was out of this world, entertainment a bit cheesy but isn’t it always now on holidays!? The staff were brilliant and the ship itself was lovely and clean. Our room was a superior deluxe balcony and absolutely perfect. Looking to book another already, I’m hooked!

I'm reading some of the reviews below. Cannot believe what I'm reading. Think I must have been on a different ship. My friend and I flew to Barbados on 1st. November. Visited 9islands. Our cabin on Australia deck was superb for the two of us. No complaints whatsoever. Our cabin steward Lourdes was excellent. Not only was the cabin spotless but she herself was too. Food excellent in all areas. All staff very pleasant asxwere the passengers. Except one couple at very beginning of cruise. Who ran the ship down and it's free and the Carribbean sad. We had a lovely 2 weeks. Thankyou Azura thankyou P and O.

Just returned from the Caribbean on this ship.would definitely not use. this ship again.standard of hygiene dreadful and majority of staff very unsociable.this ship could definitely do with a refit!

Transatlantic to the Caribbean 28th October: Azura is looking tired now and to only 9 years old as well. Entertainment was the best I have seen and the food was excellent however there seemed a general low moral amongst the St app especially at the bars. I guess the auto tipping service being cancelled is having its effect.

I went on a mini cruise to Guernsey on the 31st August to 2nd Sept. but I was on a cruise to nowhere as no one set foot on the island and we returned to Southampton. After complaining to P&O they were not interested, they take your money and don't care about anything else. My cabin was shabby, stained and frayed carpet, grubby and stained curtains and paint on the balcony furniture. I will never again book a holiday with P&O ever.

Great ship, well run, lovely helpful staff however very disappointing when you are going to one port and that is cancelled, so basically just a two night cruise on the ship,

The ship is in need of a refit, it's tired in places. We missed the sail away as we had to queue for over 2 hrs just to obtain the drinks packages - why can’t that be done online before you go? We then had to queue to register the children for the kid's clubs, and the children were bored and unhappy by this time. The kid's clubs did not meet the needs of my 3 children. Staff seemed tired and didn’t interact much as far as we could see - and we were not invited to anything the children had done.sadly. The swimming pools were great for good swimmers but there was nothing suitable for the 5 year old - this again caused upset. Why can’t mothers and young children use the spa pool occasionally if this is only a metre or so deep? The food in the restaurants and the service there was excellent. The buffet was chaotic at times and many people did not wash their hands - we have seen this compulsory on other ships - ie no one is allowed in without having their hands sprayed by a staff member. The shore trips were very good. The photographer had more queues and we couldn’t find any photos on the computer so we gave up and didn’t bother.

Azura is looking a little dated in places, but our cabin (Balcony) was comfortable and well designed. Food was OK in the main restaurants, same food in buffet but more casual and a bit canteen like. Speciality restaurants were excellent for a supplement. Drink prices very fair - no need to go for a drinks package unless you drink a lot! Entertainment was average. The Headliners cast were very good on the whole, but NCL had better shows. Excursions were very good but a little pricey. The layout of the ship was a little confusing at first, but we appreciated the quieter bars and adults only pool and sunbathing area. No shortage of sunbeds. Overall a good holiday to the Norwegian Fjords

We took the grandchildren on their first ever cruise and they really enjoyed themselves after they had settled in. They loved the Terrace Pool and spent many happy hours swimming. Once they had overcome their shyness they joined the kids clubs activities and had a good time.

All good except entertainment.

For our first cruise it was everything we expected and more. The weather was perfect and seas calm. Staff onboard are fantastic, nothing was too much trouble. They referred to us by name and were polite and attentive. The onboard florist was very knowledgeable and helpful. Can't wait to book another one.

Note: On 13 January 2018, new European legislation is being adopted in the UK which as result will mean that we may change our required method of payment at our discretion, irrespective of how any deposit or prior payment was made.
Speak to a Cruise expert 0203 848 3614