*Available at all bars and restaurants during opening hours, except when ordered as room service where normal charges apply.
Show more 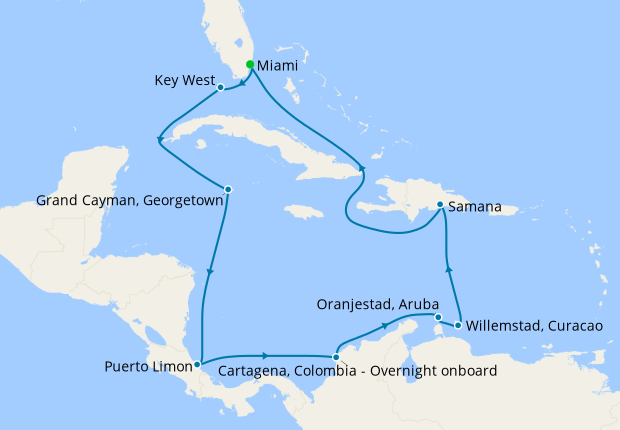 You will be at sea on day 3 while travelling from Key West to Grand Cayman, Georgetown.

You will be at sea on day 5 while travelling from Grand Cayman, Georgetown to Puerto Limon.

You will be at sea on day 7 while travelling from Puerto Limon to Cartagena, Colombia - Overnight onboard.


Things to do in Cartagena, Colombia - Overnight onboard:

You will be at sea on day 10 while travelling from Cartagena, Colombia - Overnight onboard to Oranjestad, Aruba.

You will be at sea on day 13 while travelling from Willemstad, Curacao to Samana.

You will be at sea on day 15 while travelling from Samana to Miami.

You will be at sea on day 16 while travelling from Samana to Miami.

Cabins on the Azamara Quest

Taiwan & the Philippines with Hong Kong Stay. This review is about the cruise only. The Quest is a small ship which we were looking forward to being on, but we were not expecting such a small cabin as well, which was not well thought out. Shower small with plastic curtain, strange small seat supposed to be for two people, table on balcony far too big. On port days only the Windows buffet open for lunch, not enough room, people wandering about trying to find a table, and on two times we gave up the hunt. Tables available at the poolside , but too hot out there to enjoy the food. The organised tours were OK some good some bad, some were a health and safety risk, tour boats returning full of people in the dark with no lights, and on another time everybody having to wade through water up to ones waist to get back on to the tour boat. The entertainment was ok nothing special, the cabaret lounge is not suited to shows unless you are in the front three or four rows behind that you can not see what is happening on the floor area. The Den had the piano player who was far too loud, impossible to have conversation when he was playing which was practically all evening, so we had to find somewhere else to sit to talk to friends we had made on board. The cuisine on board was fantastic, with varied menus, and the quality was excellent, 5 stars. The staff were brilliant nothing was too much trouble for them, they went out of there way to be helpful. 5 Stars. We enjoyed our cruise very much, and did not let these ship issues spoil our holiday but feel people need to know what we found on this particular cruise. Thank you

Spectacular back to back cruises on magnificent ship.

Excellent environment, good food, and wine, inadequate gym with TVs on equipment and equipment itself not working. A small gym - allowed only 20 minutes on each apparatus.

We would like to thank Wilson for organising this trip for 8 people. The flights, hotel, transfers and cruise were faultless. Would definitely use you again.

Excellent service throughout the ship - all the crew members were friendly and beyond reproach. The ship is spotlessly clean. The food was great with lots of choice and was presented wonderfully The included drinks package always had decent wine as the wind of the day. The shows in the evening were average but I didn't expect much more due to the size of the ship. Really good value for money.

Sixth cruise on this ship over a period of four years, standards definitely declined. No binoculars or clock in the cabins,Azamazing evening cheap culture show etc.. Service staff generally helpful and cheerful though lacking in numbers hence the service is slow. Unless offered a good deal will probably look elsewhere in future, very little difference in standard these days. Must add , Igloo involvement, transfers ,hotel etc. Excellent

Ship first rate,very helpful and friendly crew and liked the update since we last sailed on her. Must mention Rocky M ountaineer trip, fabulous everyone should do it.extremely well organised and very slick.

The cruse was lovely would have liked just one more port of call. The ship had recently been refurbished, was very clean, staff fantastic, food very good. The only problem we found was that the lights in the card room were turned off at about 8 pm. The card room was adjacent to a bar with glass between them so they needed the lights off when there was entertainment in the bar. We then if we wanted to play cards had to play in the bar called the Den. Can’t complain about the service in the Den it was second to none. We were very lucky with the weather only one day of rain and that was at sea. Our cruise was on 4th June until 14th June 2019. There is however one very big complaint the Air Transat we flew with we will never never fly with again. The problem seats far to narrow and very uncomfortable. Isle the narrowest I have seen on a plane. Food not very good in fact awful they only came around with drinks once if we wanted more we would have to buzz. I don’t think this is good enough as this was a flight that lasted 9.45hours. Also there was no air conditioning above our seats. It was operated for the whole plane many people had to ask for the airconitoning to be turned down as it was very very hot. We were traveling with my daughter and son in law neither they or us sleeped a wink all night this was a night flight and a nightmare. So if we should book another holiday with your company and the company you are using is Air Transat we will not book it. Hope you find this helpful. Regards Angela and Gerald

Unfortunately our short 3 day cruise was spoiled by a sewage smell in our cabin and on our balcony. Although Azamara tried to solve the problem they never really did get it sorted out before it was time to go home. We were offered a change of cabin on the evening before departure but that did not seem to be worth it as we were leaving early the next morning. We were unable to use the balcony because of the smell. We have been offered £200 off our next cruise which doesn`t compensate us much for the experience We had mentioned before the cruise that we were celebrating our Golden Wedding Anniversary, so this experience did not help. I can not help but think that this was a known problem and we should have been moved long before the last day.

Number of issues we were not happy about. As my wife is disabled, we asked you to contact our hotel in Tokyo beforehand to ask if our room had a bath or a shower. We were told a shower. On arrival, we found our room had a bath and were told no rooms with showers were available. As on your advice we hadn't brought a bath board, this was not a good start. Our transfer to the port initially took us to the wrong pier. Not a big problem as we had time to get to the correct pier but we wanted to make sure this would not happen on disembarkation as we needed to get to the airport fairly early. Took us a week to get the required confirmation from you that the pick-up time and place had been changed, requiring multiple calls and e-mails form the ship concierge and me. Ship itself was not great for wheelchair passengers. There were awkward thresholds to the upper decks making it difficult to manoeuvre a wheelchair through the doors. Getting on and off the ship could be difficult and help was not always readily on hand.And very few of the excursions organised by Azamara were deemed suitable for wheelchair passengers. Added to this, on our first day one of the grab rails in our shower collapsed (came out of the wall) when my wife leant on it, causing her to fall. Not all bad - food and entertainment on the ship were very good, staff were in the main very helpful and we managed to see a fair bit of japan under our own steam.

A very good cruise with excellent service, food and great accommodation. We shall be using Azamara again.

Our first cruise, and almost everthing was excellent. The food was so good that "Fine Dining" experience proved to be unnecessary. The shjp's company from the very visible captain to the waiters and stateroom attendants all seemed happy to go the eextra mile to be helpful. My only criticism is that an excursion I really wanted to do was cancelled due to insufficient take up. Surely they could have used a minibus, instead of a coach. That would have made the whole thing wonderful. If you're going to cruise you won't really be disappointed with Azamara.

Note: On 13 January 2018, new European legislation is being adopted in the UK which as result will mean that we may change our required method of payment at our discretion, irrespective of how any deposit or prior payment was made.
Speak to a Cruise expert 0203 848 3601
Close