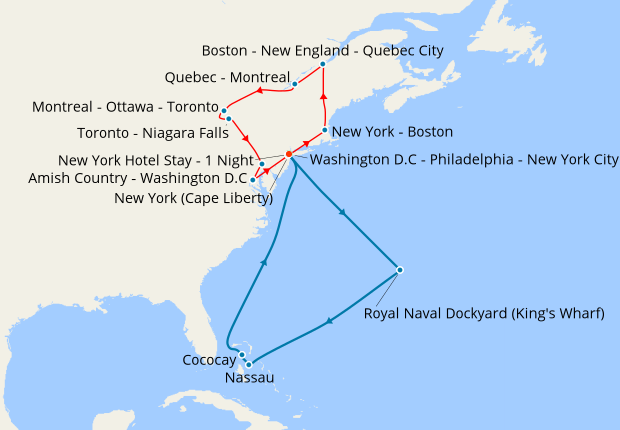 Fly to New York, the ‘Big Apple’. Transfer to your hotel where this evening meet your Tour Director who will advise you about the experience ahead of you.

Depart New York for historic New England. Travel along the Long Island Sound to Boston. Enjoy a walking tour along the Freedom Trail which begins at the Boston Common and winds beside the Old State House, King’s Chapel, the old South Meeting house, the Boston Massacre site and the fronts of many taverns and pubs where America’s Founding Fathers toasted freedom. Walk the cobblestone streets of Beacon Hill steeped in history which contains one of the city’s most beautiful neigbourhoods.

Travel through the rural New England states of New Hampshire and Vermont on your way to Canada. Pass through picturesque villages and the White Mountains. Cross the International border into Canada (make sure you have the correct entry requirements for your passport). Arrive in the Canadian Province of Quebec.

Start with a tour of Quebec City, the French Capital of the province. Landmarks include the Quebec Provincial Parliament Building and the Citadelle. They enjoy a walking tour of the walled city to see the Chateau de Frontenac and the St Lawrence River. Continue to Montreal. Enjoy a tour of Old Montreal with stops at the Place Jacques Cartier & Notre Dame Basilica.

Leaving Montreal behind continue to the capital of Canada, Ottawa. This vibrant city of parks and flowers boasts one the most impressive parliament buildings in the world. In the afternoon continue along the 1,000 Islands Parkway to the largest English speaking city in Canada, Toronto. A magnificent city located on the shores of Lake Ontario.


After a drive through the metropolis by Lake Ontario of Toronto cross the Welland Canal before arriving at beautiful Niagara Falls. You will be amazed by this natural wonder. Stroll along Table Rock, see the unique Floral Clock and see the thunderous Horseshoe Falls. Why not join an optional sightseeing cruise to get up close to the Falls?

Today, ride through the rolling farmland of upstate New York, known as the Finger Lakes Region, and enter the Keystone State of Pennsylvania. This afternoon, visit the historic Gettysburg Civil War National Battleground, site of the largest battle ever fought on American soil and the place where President Lincoln gave his famous address in 1863. Travel along the Susquehanna River to Williamsport in South Pennsylvania for the night.

This morning, travel through the rural countryside into Pennsylvania Dutch Country. Visit an Amish Museum and see their 300-year-old tradition of simple living (admission included). The Amish people live in a world that stopped in the mid-1850s. They use no electricity, mechanical devices, or modern equipment. In the afternoon, continue to the nation’s capital, Washington, D.C.

Enjoy a city tour with such highlights as the U.S. Capitol Building, Supreme Court, Library of Congress, the F.B.I. Building, Washington Monument, Lincoln Memorial, the White House and Arlington National Cemetery, site of the JFK Memorial. Spend the remainder of the day exploring some of the many museums comprising the Smithsonian Institute or simply stroll the banks of the Potomac River.

First is a stop in Philadelphia en route to New York. It is the birthplace of a nation and you will stop to see Independence Hall and the Liberty Bell.

Transfer to the airport or to the cruise port for embarkation.

Cabins on the Adventure of the Seas

Customer reviews for Adventure of the Seas

Fabulous cruise round Caribbean with a two day stay in Miami Beach. Everything went smoothly and to plan transfers were on time. The only problem we had was having to contact the taxi company when we arrived back in port as I had no service on my phone. Fortunately I managed to find someone who phoned them for me.

Booked a cruise on this ship to the Caribbean for a special occasion, and so very much looking forward to it. Our cabin was very nice as booked a suite, the staff were all wonderful. We only ate in the Windjammer buffet restaurant as don’t like the formality of a dining room. The food was wonderful at every mealtime, great selection and excellent quality. The waiters came around all of the time to get you drinks, or see if all was ok, and generally to assist, some of the best staff I have ever encountered. We had the deluxe drinks package and well worth it as there was excellent choice and good value for the price paid. However, with regard to the ship itself, I felt it was extremely overcrowded mainly when it came to the pool area, on the 12th deck the beds were all tied together and there was not even enough room to get between them, and always full. The main pool area has a children’s pool along side the adults pool, it was crammed you couldn’t get near it, far too busy. The Solarium pool for adults was also too small to accommodate the number of guests. You also couldn’t seem to find a quiet corner on deck. On the main pool deck the music blasted out and I mean blasted, and sorry but I don’t mind a bit of music but this was far too loud, not relaxing at all. The entertainment was quite good, the ice show in particular, I have never seen this on a cruise ship before and thought it was amazing. The bars were all good, and all areas very well kept. There were however over 900 teenagers/children on the ship, some were in the adult bars late at night, obviously not consuming alcohol, but I do think there should have been restrictions on where they could go after a certain time. With regard to the itinerary, we visited Haiti, Peurto RICO, St Marteen and St Kitts. I would say Peurto RICO was the best, with the others unless you like a beach or jewellery shopping, then not really much else. Also The trips are quite expensive booked through the ship. I am not sure I would go with Royal Caribbean again, as have done over 20 cruises and this was the first time I have felt so stressed on a ship and could not wait to get home. I felt the ship was far too crammed for my liking and not relaxing at all. I have also come to the conclusion I would rather stick to cruising nearer to home, as on the flight out we were allocated separate seats which is a pain on long haul I was in row 47 and my husband was in row 29. For disembarking the ship we had to leave at 8.15am but our flight was not until 20.40 pm, apparently all guests have to be off the ship by 10.00am. I have never known this as normally you are able to disembark a bit nearer to your flight time! To add to this, the return transfer from the ship to Miami airport broke down on the highway and we were stuck there for over 2 hours in the boiling heat! At which point really had enough, so all in all not the best experience.

I had a fantastic time! Everything was well organised. The flight, transfers, hotel were all good. Embarkation was trouble free. The ship has been smartened up in some areas, especially the slides and surf area which was a great experience. Staff were really friendly and were so helpful. The food was great too although over the years they have cut down on the selection (but is happening on most ships these days too!) overall, a great holiday, met some new friends on our table. Only dined in the windjammer twice all holiday (it can be extremely busy there) as I prefer a quieter dining experience. I would certainly go again! Thank you! Sent from my iPad

Alternative Cruises on Adventure of the Seas